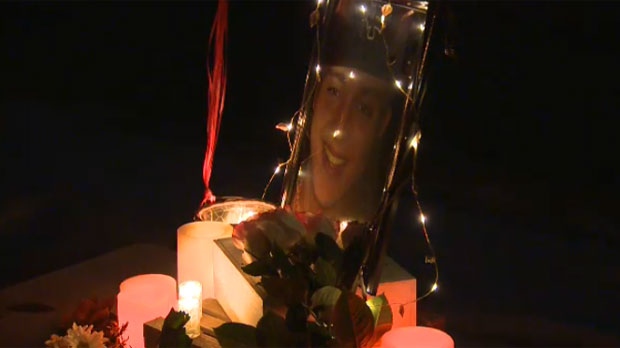 Candles surround a photograph of Kody Gallant during a January 22, 2017 vigil in Monterey Park

Family and friends of 19-year-old Kody Gallant gathered outside the Monterey Park Community Centre on Saturday night to comfort one another and plead for information regarding his whereabouts as his disappearance enters its eighth week.

“Thank you again for everyone who has come out,” Lyn Gallant, Kody’s grandmother, told the assembled crowd. “We appreciate your support. We love Kody and we need all the help we can get right now.”

Gallant was last seen in the early morning hours if December 1, 2016 in the community of South Calgary.

According to Gallant’s parents, the missing teen had been in-and-out of drug rehabilitation programs for several years. Gallant was receiving care at a treatment centre when he walked out the door. He has not been seen or heard from since.

The Gallant family says Kody would always stay in touch even in troubled times and they fear something terrible may have happened to him.

“I want Kody to know that I love him,” said Stacey Gallant in a plea to his son. “I'm not mad at him, angry. I just want to hear his voice, just call and tell me you're okay. If you don't want to come home that's fine.”

Kody Gallant is described as:

Anyone with information regarding the Kody Gallant missing persons case is encouraged to call local police or Crime Stoppers.