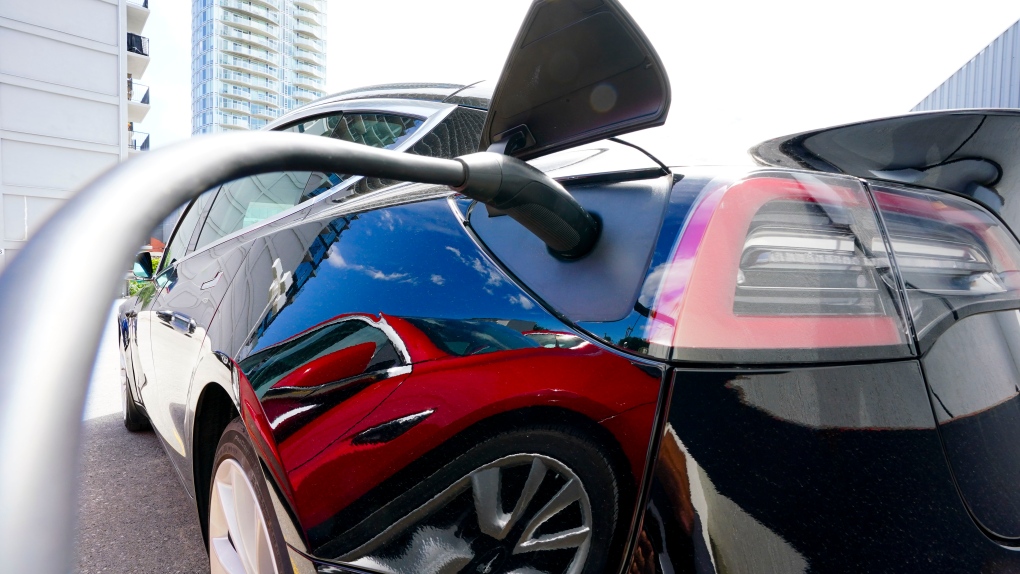 An electric vehicle is charged in Ottawa on Wednesday, July 13, 2022. Parkland Corp. says it is doubling the size of its previously announced electric vehicle charging network in western Canada.THE CANADIAN PRESS/Sean Kilpatrick

Parkland Corp. is doubling the size of its previously announced electric vehicle charging network with a focus on British Columbia, which leads the country in EV adoption.

The Calgary-based fuel retailer said Friday it will now install 50 ultra-fast charging stations on highways and in major destinations from Vancouver Island to Calgary, instead of the previously announced 25.

The locations will be capable of charging most electric vehicle models within 20 to 30 minutes and will be located across the company's existing Chevron and On The Run retail portfolio in B.C. and Alberta.

As of September, EVs made up 17.5 per cent of new light-duty passenger vehicles sold this year in B.C., making the province a logical place to focus the bulk of the network, said Darren Smart, Parkland's senior vice-president of energy transition and corporate development.

In Vancouver, for example, Parkland's On the Run network is expected to nearly triple the existing number of ultra-fast chargers in the city's metro area - an indication that the company is betting big on the B.C. market.

“There are some other provinces in Canada that are on B.C.'s heels, but I think we'll see it play out in each province a little differently,” Smart said in an interview.

“We'll keep tabs on it, and as we see demand start to justify going into new markets, we'll look to do that.”

Parkland is also focusing on customer experience, betting that EV drivers will spend money on food and retail items while they wait for their car to charge. To entice customers, all charging locations will be fully staffed, feature an On The Run convenience store and most will have a restaurant.

Parkland said customers will also benefit from an integrated digital experience through the Journie rewards app and washrooms will be upgraded.

“There are lots of examples in the market where the charger's off in the corner in a poorly lit area, and that's where we feel the market has done a disservice to EV customers,” Smart said.

“You come to our site, and the charger is located in a spot where it's easy to get into the convenience store, it's well-lit, and we're creating that connection between the charger and all the amenities we have on site.”

EV charging is becoming an increasingly competitive space for traditional gasoline retailers as they seek to woo a growing number of electric car drivers in Canada.

Earlier this week, Suncor Energy announced it is targeting EV charging as part of a larger plan to boost revenue from its Petro-Canada retail network. Earlier this week, interim CEO Kris Smith told attendees at the company's annual investor day that investing in EV charging will help to offset anticipated lower gasoline sales in the future.

“We expect gasoline demand could decline by up to 25 per cent by the mid-to-late 2030s based on current government regulation, and forecast EV penetration,” Smith said.

In October, Imperial Oil Ltd. announced it has signed a deal with FLO, a Quebec-based manufacturer of EV charging stations, to develop a charging service option for Imperial's Esso and Mobil-branded wholesalers.

“Lots of people are very focused on this space and moving quickly,” Smart said. “Everybody sees that EV penetration is increasing and wants to play in this space.”

“Even though there are more EVs as part of new car sales every year, it takes a long time for the fleet that's on the road to turn over. In Norway, for example, 80 per cent of new vehicles are EVs, but 80 per cent of the fleet is still conventional engines,” Smart said.

“We are positioned to service that demand either way, whether it's a conventional vehicle or electric vehicle.”

Parkland expects to complete its initial 25 charging locations by year-end, with the following 25 locations to be completed in early 2024.

The company declined to disclose a total dollar value for its EV charging project, though it said it will receive $6.8 million in funding from Natural Resources Canada and the government of British Columbia to support its plan.

This report by The Canadian Press was first published Dec. 2, 2022.