Part 2: Not just a Calgary or Edmonton problem

Part 2: Not just a Calgary or Edmonton problem 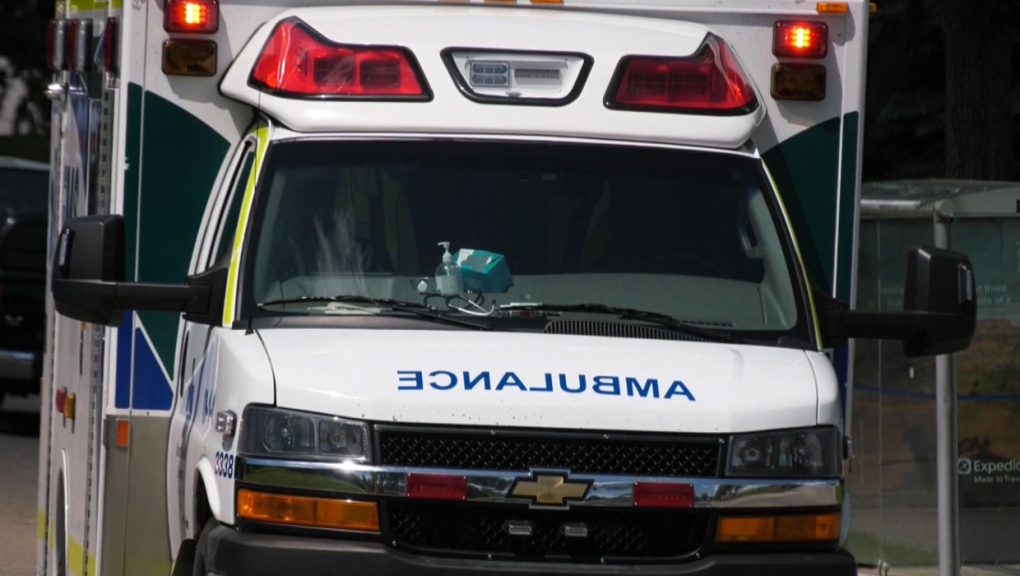 Unlike many families, Lia Lousier's is unique because her youngest child needs specialized medical care. 10-year-old Braeden was born with an extremely rare genetic disorder and is considered high-risk for medical complications. That means throughout Braeden's young life, he's had his share of being in an ambulance.

"He has lived at the Alberta Children's Hospital for a lot of his life, and he knows how it works –

Mom calls an ambulance, and an ambulance comes, and we go to the hospital," said Lousier.

Lousier and Braeden were leaving their Airdrie home, on the way the hospital in Calgary, for a routine checkup when he slipped on ice and fell in front of their house. He broke his femur, and because of his delicate state of health, Lousier said it was serious.

"The biggest thing with a femur break is you're next to an artery. With a broken bone in that area all it takes is a nick to the artery and I didn't know if he was bleeding internally."

They called for an ambulance and assumed one would arrive shortly, as it did before. However, on this day, 45 minutes passed and there was still no ambulance.

"Braeden was just crying and saying to me, 'I don't hear the ambulance. Where are they mom?'"

It was at that point Lousier called 911 back and begged for the Airdrie Fire Department to come and take Braeden to Airdrie's Urgent Care. Lousier says the whole ordeal was stressful.

"I knew the system was bad. I knew because I had heard it on the news about the lack of ambulances but to live it was severely traumatic," she said.

Airdrie officials confirm that at least one day in September, the small city had zero ambulances for a few hours and that the longest the local fire department had to wait before paramedics arrived this year was almost 47 minutes.

Many small communities surrounding big cities like Calgary and Edmonton are experiencing a lack of ambulances in their jurisdictions, especially when there are red alerts.

The reason ambulances in these communities aren't always available to service their citizens is because of the borderless system in Alberta, implemented when the province took over EMS in 2009.

That means ambulances from anywhere in the province can also respond to emergencies outside their communities if they're closest. But being close doesn't necessarily mean help is actually close at all; sometimes it is more than an hour away.

And those same ambulances can also be relocated or "flexed" to service other communities if they are needed.

"With the borderless system it was told to the rural communities, it's going to be a great advantage because when your truck left, another truck would move into cover, and they would be constantly moving trucks around and making sure there was coverage. Well, that was great in theory," said retired paramedic Don Sharpe.

In reality, AHS data showed that since 2014, an increasing number of ambulances from small communities are responding to emergencies or being flexed outside their jurisdictions, especially to Calgary. But the same level of response or flexes from Calgary ambulances to smaller communities hasn't been reciprocated.

Brian Winter started EMS Services in Cochrane in 1983 and is now the chair of the Cochrane EMS Crisis Citizen Action Group. He says the lack of ambulances in his community is felt even more when their fleet gets pulled into big cities during red alerts, which means long response times for Cochranites.

"For a Delta call, they could be waiting up to 20 to 25 minutes for someone that needs EMS treatment right away," said Winter.

"You can be within Cochrane in five to seven minutes but if you're coming from Banff or coming from wherever else it's just way too long."

AHS records showed some of the longest response times for the most severe emergencies in Cochrane even reached more than 52 minutes this year and you can't blame the pandemic.

Even before it, there were long response times of up to an hour.

The same is happening in Airdrie. Some of the longest response times were close to an hour for Delta and Echo calls, leaving some families little choice but to call for alternate transportation, like the fire department, to the hospital.

"It's not something that they do. It's not part of their jobs. They had to break protocol to do that," said Lousier.

And the Airdrie Fire Department isn't the only one that had break protocol.

In the early hours of June 26 this year, the Calgary Fire Department transported three-year-old Tara Agarawal to hospital after she fell on her head and started seizures.

She and her parents were visiting from Toronto and were able to reunite with the firefighters who helped save her life.

Tara's parents initially thought that firefighters routinely transport patients to hospital and said they were shocked when they learned that wasn't the case.

"I think that day I really wanted EMS and I wish we could've had EMS so that she could have gotten them but I'm thankful the Calgary Fire Department was trained and able to get her there so fast," said Tara's father, Daniel Langdon.

AHS documents confirm the call was coded as Delta and it took EMS about 20 minutes to arrive on scene.

"The individuals who are working on the street right now are working as hard as they can to make the system work. But obviously organizationally and systemically there is a challenge that administration of AHS needs to be listening to because what’s happening right now is frankly unacceptable," said Chief Steve Dongworth with Calgary Fire Department.

This year, the CFD transported four patients to the hospital.

Calgary police don't track that information, but officers are doing more and more transports, including a call to a bar in Kensington this summer for 29-year-old Brandon Sklenka.

"I woke up to an alarming text message that he wasn't in the right mental state. I called 911 right away," said Sierra Payne, Sklenka's partner.

But an ambulance didn't show up right away. Instead, a paramedic response unit (PRU) showed up almost 15 minutes later. It's an SUV staffed by a paramedic but can't be used to transport patients.

Medics say when a PRU arrives on scene, its arrival time counts as the response time for the call, also known as stopping the clock.

Payne said she was in disbelief to see a paramedic on scene but that they couldn't take Sklenka to the hospital.

Twenty-five minutes passed and still no ambulance. AHS documents confirmed two other ALS ambulances were dispatched, one from Airdrie and one from Calgary, but before they arrived, Calgary police made the call to take Sklenka to hospital.

However, it was too late – Payne's partner of eight years died.

"Honestly it just didn't seem real. I kept wanting to wake up from a nightmare," said Payne.

"It's not the staff because they are trying their best. I know the first responder with Brandon did everything they could, but they're already not given a fair chance when they get there because they've lost time or don't have proper tools or equipment."

High stress and traumatic incidents like Sklenka's aren't easy for police either. An officer on scene makes the difficult decision to take a patient to hospital, but because of the increase in frequency of this happening, Calgary Police Service, along with the Calgary Fire Department, are now able to call a physician who can give them direction.

Deputy Chief Chad Tawfik says Calgary is the first police force in the province to implement the physician call line protocol. He says they don't have the resources to be transporting patients to the hospital.

"We've got a lot of work in front of us as well and our staffing challenges are not unlike other emergency services, and I think you see that across Canada," he said.

Tawfik believes officers transporting patients is temporary. He says the force is not properly equipped

"Ideally, in the long term, I think we'd want to see EMS and AHS have the capacity they need to respond in a timely manner to all these situations. But in absence of that we need to do our part."

Payne thinks this is a Band-Aid solution.

Meanwhile, Lousier and her son are both working to get through the trauma of their incident.

As they try to move forward, Lousier knows that with Braeden's condition, they might have to go to the hospital in the future for an appointment or an emergency, but she has lost confidence an ambulance will show up in time, and is considering a plan B.

"If I could keep him stable enough in whatever situation and I needed an ambulance, I would try my hardest to take him myself."