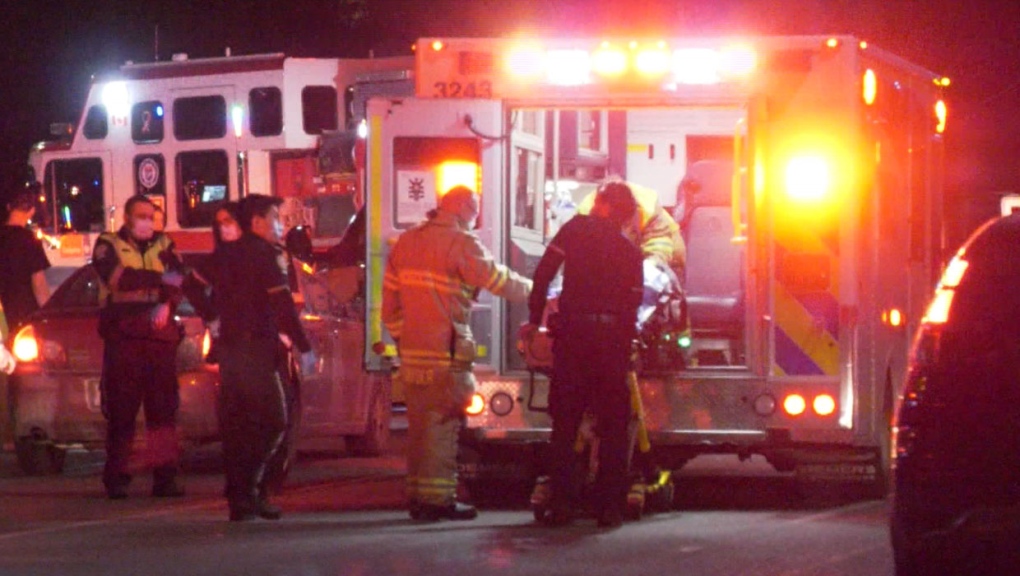 Paramedics in Alberta warned about the declining state of EMS well before COVID-19. And while the pandemic added more strain, those working the front lines say the crumbling started years before.

Mackenzie Payne is Sierra Payne's brother, but also a paramedic. He agreed to give his perspective about the challenges of his job with the understanding he is sharing his personal opinion and doesn't speak on behalf of AHS.

Payne says he is worried about repercussions after speaking out but after what happened to his sister's late partner Brandon Sklenka, who was transported to hospital by CPS when EMS didn't show up, Payne couldn't keep quiet.

"My worst fear in all of this has always been that an ambulance won't be there for my family," said Payne.

"And then it happened."

Contracted by AHS, Payne has been working as a paramedic in rural Alberta for 15 years. He says morale is the lowest it's been in a long time and paramedics are overworked, tired and stressed.

"People are getting frustrated, more and more, and they're not able to manage work-life balance. People are having sleeping problems and are on medication to sleep. They have mental health issues and I think it's gotten worse and worse," he said.

"Some people do a 24-hour shift or even up to 96-hour shifts. So, you need time to turn off sometimes, right? And especially some of these calls are high stress. You need to decompress from seeing some of this stuff."

A Freedom of Information request showed this year, Alberta paramedics worked an average of about 676 hours of overtime per day and were off on sick leave for about 650 hours per day.

Both those figures roughly doubled since 2015.

Mike Parker, president of Health Sciences Association of Alberta, the union that represents paramedics, says on average there are 600 unfilled paramedic shifts per week across the province.

"We've stopped taking care of the paramedics on the street. We expected them to be a disposable product that we can just replace at any time and the reality has set in as we've seen decreases in our resource level," said Parker.

The strain is also felt in dispatch.

An ECO who spoke to CTV News anonymously said after last year's dispatch consolidation for remaining municipalities in Alberta, including Calgary, the transition was chaotic. There weren’t enough staff, and they weren’t trained properly.

And now the strain is even worse because many are burnt out.

AHS records show since 2015, the number of ECOs off for sick leave has more than doubled and overtime hours worked has more than tripled.

"There was a note that we have that describes one evening in this province, and it was a weekday evening, and there were four people answering 911 calls in the province of Alberta for our paramedics – four," said Parker.

"If it's not coded properly, then say you have a lower acuity call, that person may actually be in more medical distress, and they don't get resources and we don't have anybody to send, and they’re overlooked."

The ECO said this has happened.

AHS has blamed the strain and lack of new recruits in the last few years on everything including the pandemic, weather, wildfire smoke, opioid crisis to low birth rates.

"This problem has not been going on for the last two years. It's not COVID. There always seems to be an excuse but it's been going on for a long time and it's just now to the point where the public is starting to realize it's at a breaking point," said Payne.

"Our cities have continued to grow. Our province continues to grow. Our resources need to match the growth of our population and call volume increases, and they haven't," added Parker.

According to AHS data, the population in all health zones has increased since 2009, with the Calgary zone growing the most.

Calgary zone's population is three times that of the Central and North zones, yet all of them have about the same average number of operating ambulances.

And when there are no resources, red alerts happen.

The numbers in Calgary have been growing over the years, even before the pandemic hit.

The number of red alerts in Calgary almost tripled between 2017 and 2018.

Parker says red alerts were meant to be used for large-scale emergencies.

"The code red conversation is when there was a tornado or when there was a massive disaster to alert all available resources that something big has happened. Today it's thrown around as just another day."

According to two retired paramedics who were employed when EMS was run by the City of Calgary, they say EMS in Alberta wasn't always like this.

Don Sharpe says medics didn't have to routinely work past the end of their shift. They'd have time to eat, rest and train.

"We were enthusiastic about going to work. We were proud of what we did. We had great leadership, great equipment, and organization."

Clayden says they were in the top 10 EMS in North America.

"We had autonomy to create. If we had an idea, we could work it through."

Clayden says the autonomy to share and implement ideas to improve EMS came to a halt in 2009. He was in the room when the province announced it was taking over.

"The idea that you could hear a pin drop in the room was exactly what it was. The only sound maybe was people's jaws dropping and hitting the table. Because of all the scenarios that had been thought up for us, that was the worst."

AHS says the reason for a centralized system came because municipalities wanted government funding for EMS, and it was a way to standardize patient care across Alberta.

Brian Winter says paramedics were told there would be no degradation of services.

"They come in and say we're going to increase the number of cars that serve Cochrane. Well in 2009 we got two cars, and in 2022, we still only have two cars, and the population has doubled."

Sharpe says by 2012, it became obvious to him there were lots of problems with the new system.

"Hallway waits were getting worse, response times were lengthening, equipment they said they were going to give us wasn't materializing, the standard of care, the training we were receiving was starting to kind of fall off."

Sharpe says hallway waits are one of the main reasons people who call 911 are not getting emergency care when they need it the most. It happens because paramedics are required to stay in the hospital with a patient because there are no emergency beds to put them in.

Paramedics started doing this before the province took over EMS, but it's gotten worse. Many are now waiting in hospitals their entire shift and can't respond to calls.

"Initially it was one ambulance or two ambulances waiting and then it became four and five. And then it just seemed like it just became accepted that it's ok for the paramedics to wait in the hallway," said Clayden.

In the case of Don Anderson, who died in hospital after waiting more than an hour for an ambulance to arrive at his home, although the ambulance got to the hospital around 7:20 a.m., the paramedics weren’t cleared until two hours later.

"After my husband got to the hospital, they left him there in the bay," said Andy Anderson, Don's wife.

"Why is he sitting in the bay?"

Sharpe says there are other countries where hallway waits don’t exist. For instance, he worked in Israel for a few years and says they have a more efficient system.

"In Israel, when I get to a hospital, I don't talk to a triage nurse. As a medic, I know where I'm taking my patient. I go directly there.

"I give my report to the first nurse I see, and I help them get the patient into a bed and I leave."

The reason for hallway waits in Alberta is access block, which is when patients are unable to move from the emergency department to a bed in the hospital.

Dr. Peter Jamieson, Foothills Hospital's medical director, says recently more patients are going to the emergency department, the number of sicker patients has also increased and there is a shortage of staff.

However, he says access block has been an issue for years because hospital beds are taken up by patients who can be elsewhere.

"It's not the patient's fault. It's because they have a particular set of needs which could be met in other places. We just have to get the services in the community organized or funding for them."

But Jamieson says efforts are underway to keep patients moving out of the hospital quicker to free up the emergency departments and allow paramedics to get back on the road.

Payne says at least at the hospital in Strathmore, he's had to wait a long time in the hospital with a patient.

When asked what he thinks the state of EMS will look like in five years, Payne wasn't sure but is hopeful.

"If you would ask me five years ago if I would be here, right now, I would have never predicted it. So, I honestly have no idea.

"I hope it gets better. Because I still have a long career left and I want it to be better."