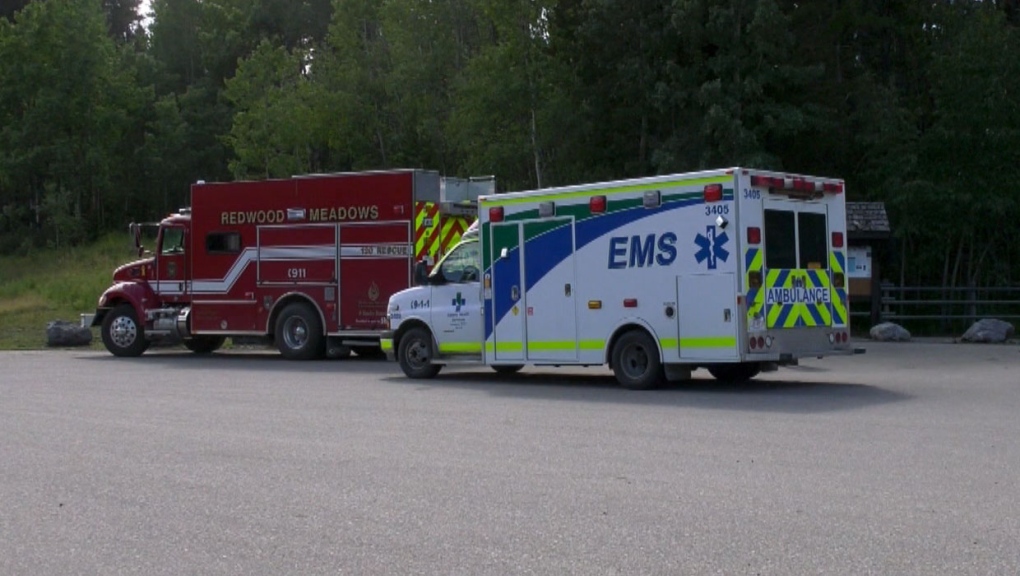 In response to the EMS crisis in Alberta, citizen action groups were created in small communities across southern Alberta by retired paramedic Don Sharpe.

The goal was to get community members to become engaged and find ways to improve the system within their own communities.

The Cochrane EMS Crisis Citizen Action Group is exploring the idea of training civilians in CPR and first aid who can be called in the event of a 911 response delay.

Ali Morrison is one of the members.

"It means that we can get somebody on the spot right away," she said.

"They would arrive at the house and there would be somebody who can be calm, non-emotional and they can assess the situation."

The town is taking matters into its own hands even as the province responds to the EMS crisis by adding $64 million to the budget.

"We're adding more money, but we need to transform how we manage the system to be

But Brian Winter, chair of the Cochrane EMS Crisis Citizen Action Group, says the plan doesn't address hospital hallway waits or flexing rural ambulances, which he says needs to stop immediately, if a difference is going to be made to resources.

As for non-emergency transfers, Winter says there's a better way.

"We have a private service in Cochrane that basically are here for oil field assignments, but they told us they would take transfers to Calgary."

Alberta's chief paramedic Darren Sandbeck says the province has seen a 30 per cent increase in call volume since last spring, a stark difference from the four to six per cent annual increase normally experienced.

"And we saw that, and we would plan for that as the budget would allow. We would add resources to the system. But, frankly, we were probably behind adding resources," said Sandbeck.

Paramedics say some of the ambulances in the current fleet are broken down and others on the street are well overdue to be retired.

However, they're having a tough time buying more. He says 134 have been ordered but they've received less than 30.

"That requires us to manage our existing fleet. We're hiring at a rate that we've never hired before. Over 200 staff."

But Mike Parker, president of the Health Sciences Association of Alberta, says it doesn't matter if more staff are being hired or if more ambulances are being added. He says no one is joining the system and they have postings all around the province they can't fill.

"They've saved a hell of a lot over the last 15 years by not hiring. They will say they hired a few but that will never compare to how many they lost that week, or how many have exited the system.

"We are sitting basically where we were 10 years ago for members – it's not grown a lot.”

The NDP has been critical of the state of EMS, saying the focus should be dealing with the opioid crisis, getting paramedics off shift on time and offering new recruits full time positions.

"Let's be clear, the 10-point plan came out at the same time as the government was

"What we need to see, I think is a larger commitment from this government and a real change

in tone with how they are treating healthcare workers."

As for other cities across the country, they're also dealing with their own EMS issues.

In rural B.C., an eight-month-old baby died waiting for an ambulance. There were none in the town to respond at the time. And in Montreal a 65-year-old man passed away while waiting more than 11 hours for help.

But comparing red alerts and hospital hallway waits to Ottawa, a city with a similar population to Calgary, CTV News found in 2022, Ottawa paramedics spent an average of 174 hours a day waiting in hospitals.

Calgary paramedics spent an average of 334 hours a day waiting in four of the city's main hospitals.

And for red alerts, Ottawa averaged five per day, while Calgary averaged 15 a day.

On the issue of morale, Sandbeck acknowledged it's an issue.

"I get that we have a morale problem. But we really need to do a better job of being out and talking to our folks and being out and engaging with our folks," he said.

CTV News told Sandbeck that it was difficult to find paramedics to speak on the record because they’re scared of reprimand and discipline.

"I understand that," he said.

"But I don't think we've ever disciplined or reprimanded anyone for speaking up."

But a freedom of information request revealed that an Airdrie paramedic, Ryan Middleton, was disciplined earlier this year.

Records show AHS suspended him without pay for social media posts about EMS on his personal account where he doesn't claim to be representing his employer.

The documents show he was also disciplined after his wife spoke to media on her own accord.

Records also show that Sandbeck is aware of Middleton's case. In an email, he states, "can we discuss please overall approach to this individual – we need to find a different path in dealing with him (and his spouse)."

But when CTV News asked AHS about it, a representative said they "can't comment on internal disciplinary matters and AHS doesn't regulate, restrict, or direct private or personal views or opinions of individuals."

We reached Middleton for comment on the matter, but he declined as he awaits arbitration, however, those familiar with his situation, including Morrison are outraged.

Sharpe says there needs to be a full change in leadership.

"The work environment is so toxic, anybody in the current leadership, it doesn't matter what they do, they can't fix it."

That's the big question lingering over the heads of many negatively impacted by the current EMS system – can the system be fixed?

"The things we put in place may work, some it may, some it may not at all right, but we're

going to learn from it and then keep moving to fix it," he said.

It's too late for Andy Anderson, Candace Speck and Sierra Payne, but they too still want to see changes. As for whether they are optimistic about meaningful change.

"They can say all they want but the proof is in the pudding. They can say it, but I need to see it."

"It's easy to make empty promises or turn it into a political thing. It's like what are you actually doing to improve it other than saying what you're going to do and not get them done," said Payne.

Anderson wants an opportunity to sit down with AHS and government officials to share her thoughts.

"You need to see the people's lives you affected. Because we're people and you're costing people, families and loved ones. And you need to realize what's going on here."