"My wife and I have always had a dream of renovating (an Airstream). We love the idea of things that maybe have been a bit neglected, falling into disrepair, and then pouring some love into them," said Brandt.

Brandt brought his idea to SAIT, where students jumped in with both feet.

"We're going to rebuild this thing and I think it's going to be a very, very special project," Brandt said.

The Calgary-born country singer is SAIT's school of manufacturing and automation and school of transportation's Maker in Residence, which means he’s been able to call on student expertise from 3D design and CAD designers, to architectural technology students and RV service technician apprentices.

"We know that Paul plans on taking it on tours. So for us to get everything exactly right, and as perfect as we can, is very important," said Kindt.

Kindt's wife, architectural technology student Alicia Kindt, is also working on the rebuild. She’s one of the team creating the floor plan, modelling the final product and coming up with a workable design.

She says the students see Brandt’s Airstream rebuild as something more than just a class project.

"Not only do you have students coming together, but the purpose of the whole thing is that he's gonna travel Alberta with it," she said.

"So he's bringing that Albertan community together on tour and I think it just gives people a sense that they can take pride in it. Everybody has a little piece of it." 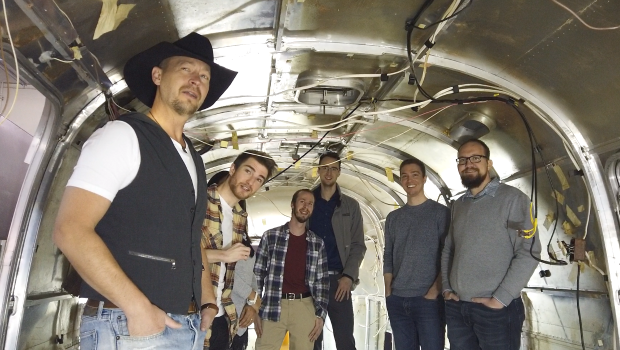 Calgary-born country star Paul Brandt shows off the inside of his gutted 1973 Airstream trailer on Monday at SAIT.

While Brandt may love the classic Airstream design, RV technician instructor Robin Bunker admits they are tough trailers to retrofit.

"The problem with the airstream is: conventional RVs are square, or somewhat square. An Airstream is less than square. It's rounded," he said.

"It's curved at the front in the back and (that) makes interior finishing a little bit more complicated.”

Its iconic silver body is mounted back on the chassis and a subfloor is in, but even that’s light years ahead of what it was like when the airstream arrived at SAIT.

Brandt and his wife discovered the rundown trailer sitting along Highway 1A west of Cochrane. Once he got it home Brandt started tearing into it.

“I'm really good at ripping things apart. Not so good at rebuilding them,” Brandt admitted. "I showed (the students) time-lapse video of me ripping the thing apart, and I'm pretty sure I saw one or two people just shake their heads just kind of going ‘What is he doing?’”

When he started brainstorming with the students, Brandt says no idea was "off the table."

“As a songwriter we never start with the limitations, we always start with the questions — what if? And why not?"’ said Brandt. “When they started thinking about it that way, creatively, we had an amazing amount of just incredible opportunities and ideas.”

Brandt has yet to set a final budget, or at least he’s not letting it slip if he has one.

"That's gonna have to be discussed at some point in time," said Bunker. "He's open to ideas, pretty specific on what he wants, though. He'll take an idea and either likes it or he doesn't like it, which is how a customer should react."

The entire Airstream renovation is expected to take about a year. Brandt has named the project AlbertaBound, after one of his hit songs.

"A lot of big dreams for this and I just am so excited about seeing the final product. I think it's gonna be really amazing and I can't wait to share it with the rest of the country."