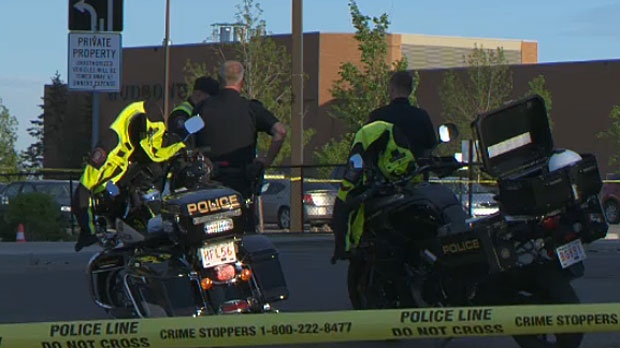 Calgary police say that a woman who was hit by a truck on Tuesday evening has died in hospital.

Calgary police say that a woman who was seriously injured in a crash on Tuesday evening has succumbed to her injuries.

Emergency crews were called to the parking lot at Sunridge Mall on 36 Street N.E. at about 6:50 p.m. for reports of a crash.

Investigators say a 2015 Ford F-150, driven by a 44-year-old man, was heading northeast towards the access road from 26 Avenue N.E. A 33-year-old man was in the passenger seat of that vehicle.

Another vehicle, a 2014 Toyota Corrolla, driven by a 36-year-old woman, was driving southwest from the access road.

Police say that the driver of the truck suffered a medical event and veered off the road into the path of the Toyota, hitting the car and sending it backwards onto a traffic island.

The truck continued to move, mounting the curb and hitting a 48-year-old woman on the footpath before ultimately crashing into a business.

The pedestrian was taken to the Peter Lougheed Centre but later died of her injuries.

The occupants of the two vehicles, including the driver of the truck, sustained minor injuries in the crash.

Police say speed and the medical event are being considered as factors in the crash.

The victim’s identity has not been released.

They are still investigating the incident and anyone who may have witnessed the incident is asked to contact the Calgary Police Service Traffic Section at 403-567-4000.