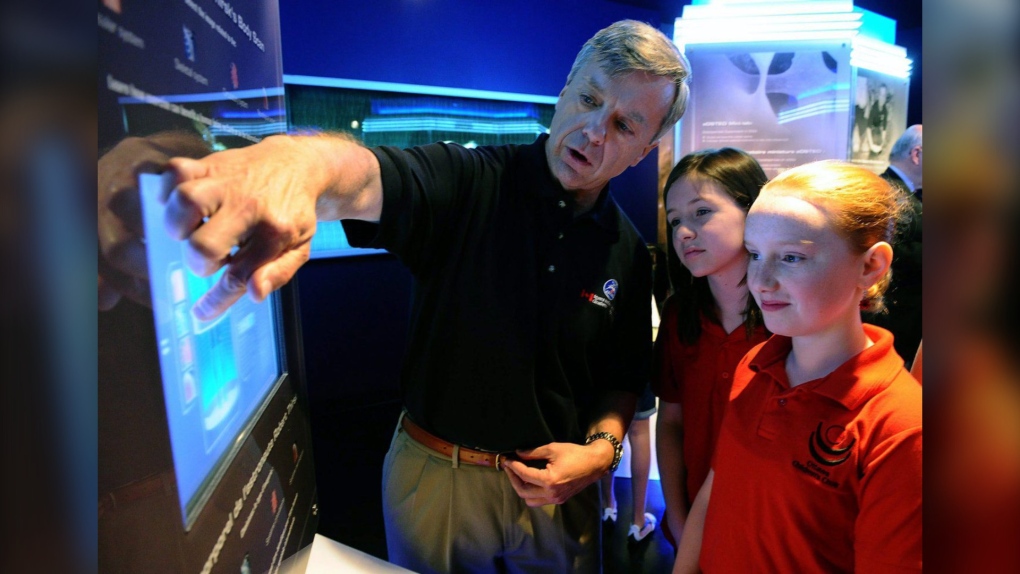 FILE - Canadian astronaut Robert Thirsk talks with students from Rockcliffe Elementary School as they get a first look at The Living In Space exhibit during its unveiling at the Canadian Aviation and Space Museum in Ottawa on Thursday, May 12, 2011. (THE CANADIAN PRESS/Sean Kilpatrick)
CALGARY -

The experience may be out-of-this-world but research indicates those who travel to outer space suffer from increased bone loss.

The TBone study, conducted over a seven-year period starting in 2015, found that prolonged weightlessness accelerated bone loss in the astronauts.

"We found that weight-bearing bones only partially recovered in most astronauts one year after spaceflight," said Dr. Leigh Gabel, an assistant professor in the faculty of kinesiology and lead author of the study.

"This suggests the permanent bone loss due to spaceflight is about the same as a decade worth of age-related bone loss on Earth."

The researchers travelled to Johnson Space Center in Houston to scan the wrists and ankles of the astronauts before they left for space, on their return to Earth then after six months and one year.

The findings, published in Scientific Reports, said the loss happens because bones that would normally be weight-bearing on Earth, such as the legs, don't have to carry weight in a zero gravity setting.

"There is quite a variety of response among astronauts when they return to Earth."

The study found some astronauts who flew on shorter missions, under six months, recovered bone strength and density in the lower body compared to those who flew for longer durations.

As future space missions are exploring travel to more distant locations, the study's next iteration plans to look at the effects of even longer trips, to support astronauts who may one day travel beyond the International Space Station.

The University of Calgary's former chancellor and astronaut, Robert Thirsk, said he knows how difficult it can be to be back on solid ground.

"Just as the body must adapt to spaceflight at the start of a mission, it must also readapt back to Earth's gravity field at the end," he said.

"Fatigue, light-headedness and imbalance were immediate challenges for me on my return. Bones and muscles take the longest to recover following spaceflight. But within a day of landing, I felt comfortable again as an Earthling."

The study was funded by the Canadian Space Agency in partnership with the European Space Agency, NASA and astronauts from North America, Europe, and Asia.

This report by The Canadian Press was first published June 30, 2022.