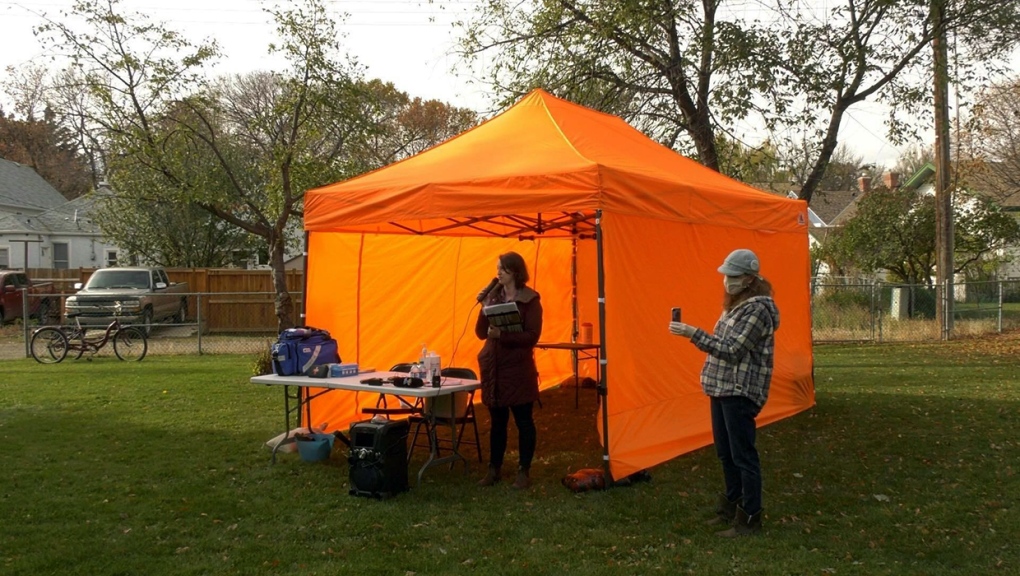 A group of Lethbridge volunteers say a supervised consumption site would save lives. “Our patients are dying and this is really necessary because our systems are not taking care of people enough and there not preventing people from dying from opioid poising,” said physician Bonnie Larson.

LETHBRIDGE, ALTA. -- The Overdose Prevention Society orange tent was set up at 2 p.m. Thursday in a Lethbridge park for a press event.  The site wasn’t up to treat any patients but rather for supporters to share their thoughts on why they feel it’s vitally important.

“It’s really very important to show just how many people of all walks of lives are supportive of this, not only in Lethbridge but province-wide and actually nationally,” said physician Bonnie Larson.  “It just happens that the rate of mortality from opioid poisoning (in Lethbridge) is higher than anywhere else in the country right now.”

On September 25th the group set up an orange pop-up tent at the Galt Gardens. Since then the group has set up 12 of the past 20 nights, handed out over 500 clean needles, and 54 naloxone kits while servicing 30 people per night.

“Our patients are dying and this is really necessary because our systems are not taking care of people enough and they are not preventing people from dying from opioid poisoning,” said Larson.

On August 31st the city’s supervised consumption site was shut down after a provincial audit found $1.6 million of public money missing or unaccounted for. The province then transitioned services to a mobile prevention site.

“We have to have a more targeted approach which is what we have brought in with the mobile site, with detox-and-intox and 125 treatment beds to be brought online,” said Lethbridge East MLA Nathan Neudorf. “If we don’t move these people through to the cycle to treatment and recovery, they get stuck in that hamster wheel of addiction.”

Neudorf did give his thoughts on the Overdose Prevention Society's pop-up tent.

The Overdose Prevention Society was hoping to give media members a tour of its orange pop-up tent but that was disrupted by a few protestors.

“I hope that few protestors who showed up don’t take precedent over the doctors who showed to share their views on the pop-up tent and overdose crisis” said OPS volunteer Tim Slaney.