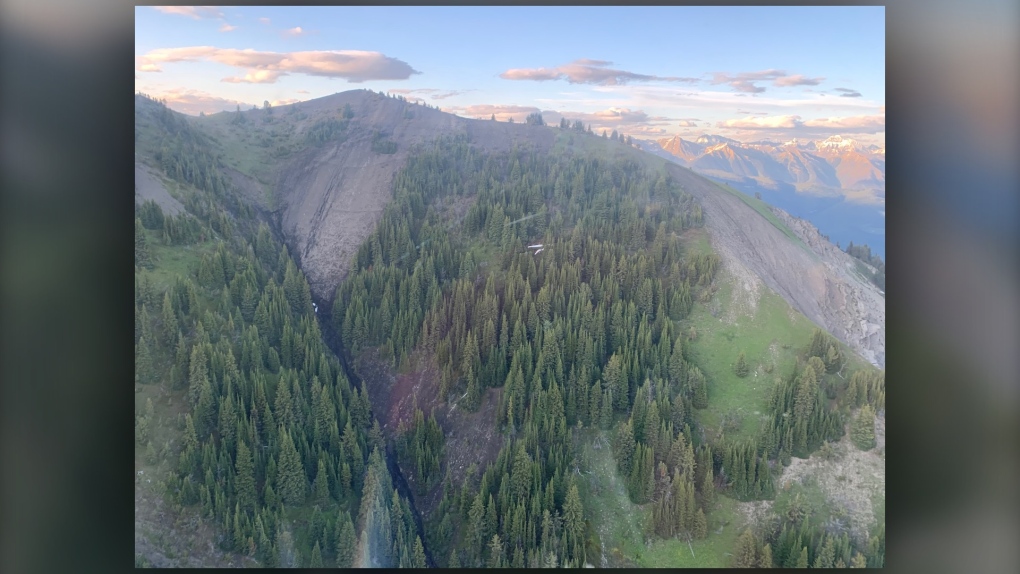 The mountainous region near Invermere, B.C. where a glider crashed July 10, 2020 (Columbia Valley Search and Rescue)

CALGARY -- One man was airlifted to the Foothills Medical Centre in Calgary following a Friday evening glider crash near the airport in Invermere, B.C.

Trevor Florence, owner of the Invermere Soaring Centre, tells CTV News that he had just landed his glider shortly before 7 p.m. on July 10 and conditions were great. He began monitoring the unusual path of another glider using a device for collision avoidance on-board his glider.

The pilot of the airborne glider — who Florence says is a member of a Vancouver-area gliding club — was flying in an area that sparked concern.  It appeared from the flight path that the glider was "flying itself" for several minutes before coming to an abrupt halt.

An emergency call was placed to RCMP, B.C. Ambulance and local search and rescue.

Ahead of the arrival of emergency personnel, Florence asked a helicopter pilot to help him survey the area for the downed glider. Within minutes, the pair spotted it from the air and the aircraft's cockpit appeared unscathed.

Florence was dropped near the site with a first-aid kit and he made his way to the wreckage where he discovered the pilot was alive and semi-conscious.

A helicopter with a doctor and members of  Columbia Valley Search and Rescue arrived on scene and retrieved the man using a gurney and rope-rescue system.

Florence says the search and rescue crews did a "marvelous job" in reaching the scene in short order and commends the doctor for her actions.

"She was fantastic," he said.

The pilot of the downed glider was transported by helicopter to the Invermere Hospital and arrived within three hours of the crash.

According to Florence, the pilot had suffered a neurological issue in the minutes prior to the crash and suffered no serious injuries.

Due to the nature of his medical concerns, the pilot was airlifted from the Invermere Hospital and arrived at the Foothills Medical Centre in Calgary early Saturday morning in critical condition.

Florence says, as of Monday morning, the glider pilot remains in hospital in Calgary where he has been able to sit upright and talk.

RCMP confirm the pilot was a man in his 70s from Kelowna, B.C.

The Transportation Safety Board of Canada is investigating the crash.