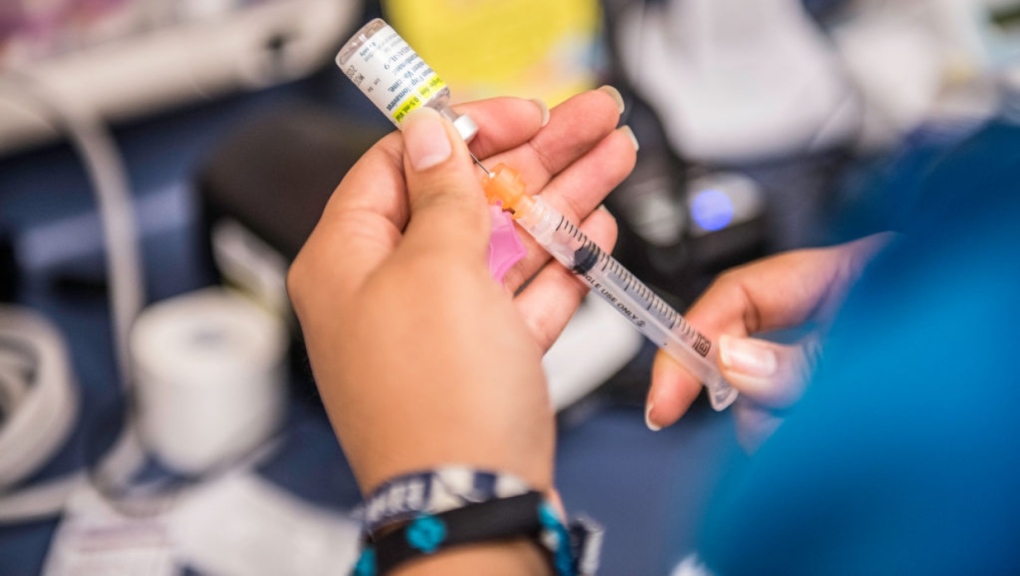 Members of two Canadian health organizations are raising the alarm about a drastic drop in the number of eligible youth who were vaccinated against HPV last year thanks to the COVID-19 pandemic.

Both the Federation of Medical Women of Canada (FMWC) and the Society of Obstetricians and Gynaecologists of Canada (SOGC) are calling on provincial and territorial public health services to prioritize HPV prevention.

The warning comes ahead of Canada's fifth annual HPV prevention week, which starts on Sunday, Oct. 3.

Both groups said the pandemic disrupted HPV vaccination programs at schools throughout Alberta, causing clinics to be postponed, interrupted and cancelled.

According to data obtained on the Government of Alberta's childhood immunization coverage dashboard, just 9.8 per cent of eligible 12-year-old girls received their second HPV vaccine dose in 2020, compare to 65.5 per cent in 2019. (Edmonton 8.7 per cent in 2020, Calgary 12 per cent in 2020.)

Dr. Vivien Brown, past president of the Federation of Medical Women of Canada (FMWC) and chair and co-founder of HPV Prevention Week in Canada, said the numbers are concerning.

"About 75 to 80 per cent of adults will have been exposed to HPV at some point in their life," Brown said. "When you're exposed to HPV some of us clear it, the way we clear any other virus, but some of us end up with persistent HPV.

"For the last 10 years we've had a vaccine that is very effective against the HPV virus, so if we end up vaccinating – particularly young people, before they get exposed to HPV – we'll end up being able to eliminate some of these diseases."

HPV vaccines are supported by public health and provided at no cost. Youth in schools across the country are able to get the shot once they turn 12.

Though there currently two HPV vaccines, Cervarix and Gardasil, the one administered at schools throughout Canada is Gardasil.

"Public health was completely overwhelmed with COVID-19. I think that is understandable. But because they were overwhelmed both in the amount of work and in the situation, the school programs were often stopped – and that's because school was stopped,” Brown said

"They weren't being vaccinated in the school program suddenly."

Brown said there's been a huge number of eligible youth that have fallen through the cracks and have not been vaccinated yet.

"There were some catch-up clinics that were planned in August and September in Alberta, but parents had to know to take their kids to the clinic," she said.

Brown is suggesting parents of Albertans age 12 and over reach out to Alberta Health Services to find out how to get their child vaccinated.

The National Advisory Committee on Immunization (NACI) announced on Sept. 28 that COVID-19 vaccines may be given at the same time as, or any time before or after, other vaccines, including HPV vaccine.

"So if you're taking your kid for anything – a flu shot, a COVID-19 shot, measles, mumps and rubella, tetanus – they can get their HPV shot at the same time," Brown said.

Brown said though many students in Alberta are back to in-classroom learning this year, there is still concern that those who opted to attend class virtually might miss their chance to get vaccinated.

There are also concerns that the program could again be disrupted should students be moved completely to online learning as COVID-19 case numbers in Alberta continue to climb.

Brown said though there were some parents who had concerns about the HPV shot when it was introduced a decade ago, they've proved unfounded.

"There was some concern when the vaccine first launched that if kids get immunized, are they going to feel that they can be more promiscuous because they feel safer? The research over the past 10 years shows the reverse. As we educate kids about HPV and about exposure they actually are less likely to be sexually active."

The Calgary Catholic School District said delivery of HPV vaccinations was shifted last year due to COVID-19 but they will be resuming in-school immunizations this year.

The Calgary Board of Education declined to comment by the time of publishing.

Hockey Quebec says it has lost confidence in Hockey Canada and will not transfer funds to the national organization. The provincial federation confirmed to The Canadian Press that its board of directors adopted a motion Tuesday night saying it does not believe Hockey Canada's current structure can change hockey culture.