Point 'em down: Canada's alpine ski World Cup races back with a bonus in Lake Louise 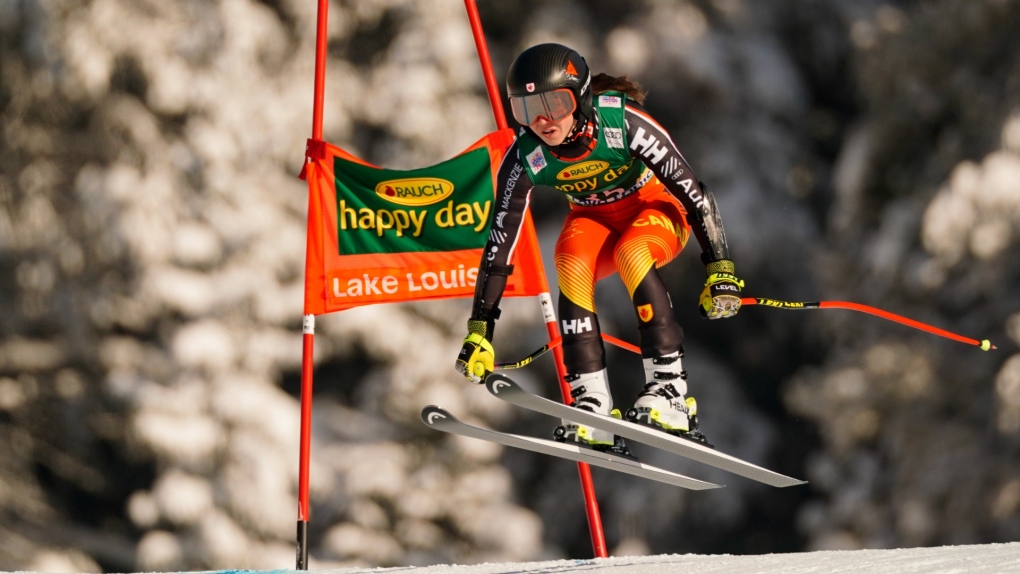 World Cup alpine ski racing returns to Canada after a pandemic hiatus with something extra.

A third race joins the men's downhill and super-G in Lake Louise, Alta., that traditionally open the international speed season.

The first of two downhills is Friday in the Banff National Park ski resort west of Calgary, followed by a second Saturday and Sunday's super-G.

Both men's and women's World Cups in Alberta were cancelled in 2020 because of the COVID-19 pandemic. Their absence was hard on the local economy and a bummer for Canada's alpine team because Lake Louise is its one home race of the year.

It's also a mountain where the Canadians feel comfortable, having grown up competing in developmental races on the same track.

Alpine skiing was a snow sport that managed a quasi-normal season last winter during the pandemic, but that also kept the Canadians in Europe for months.

Canada's men kicked out of the start hut above Lake Louise's Sunset Gully on Tuesday in the first of three scheduled training runs for Friday's much-anticipated opener.

“It's also one of the best downhills, I think to start the year off. It's fast. It's hard to win, but it's not necessarily the most terrifying for us because we've had the chance to ski it so many times.

"You also have your family around. You have more stuff to do, but it never feels like a chore. You're at your home hill. You've got friends and family at the track."

Racers want to be named to their respective countries' Olympic teams for Beijing in February.

Lake Louise is where that journey starts for the world's speed specialists in alpine racing.

While the extra men's downhill is new this year, the women arriving next week will race two downhills and a super-G for a 13th year.

The retirements of world champion Erik Guay, and world championship medallists Manuel Osborne-Paradis and Dustin Cook in recent years leaves a Canadian men's downhill team with an average age of 24 trying to climb the ranks.

Crawford placed fourth in alpine combined and Seger was fourth in super-G.

Whistler's Broderick Thompson, brother of Olympic ski cross champion Marielle Thompson, is the oldest on the team at 27. He's younger in racing years, however, having lost two to a knee injury in 2018.

Cameron Alexander of North Vancouver, B.C., is working his way back from a knee injury sustained in last year's opening downhill in Val-d'Isere, France.

Vancouver's Sam Mulligan, 24, has completed half a dozen World Cup race in his career.

The men's speed team is overseen by former world champion downhiller John Kucera of Calgary. He won Lake Louise super-G gold 15 years ago and was second in the event in 2008.

"What's really nice about Lake Louise for this group in particular because they're young and we're still gaining experience on a lot of other tracks in the world, this is the one where we have that experience with the Nor-Ams and forerunning in the World Cups," Kucera said.

The host country gets extra quota spots in World Cups. Kucera can enter up to eight Canadians in training runs and as many as six in the races.

"As the home nation, you get a little bit of benefit to run some more athletes or some younger athletes you might not be able to run elsewhere depending on their world rankings," Kucera said. "It's always important to take advantage of that."

Osborne-Paradis was the last Canadian to stand in the podium in Lake Louise in 2014 when he was second in downhill.

The podium is the goal, but placing in the top 30 is also coveted.

A top-30 ranking means a top-30 start bib, and an advantage over later starters who ski a more chewed-up course.

Crawford and Seger are ranked in the top 30 in super-G, but not downhill.

Seger's last race in Lake Louise was the 2019 super-G when he was 23. He was the 57th starter among 61, but crossed the finish line in 16th to the roaring delight of Canadian fans.

"That was a very special moment for sure," Seger said. "Just the fact we're racing on home soil again is very exciting and I'm looking forward to having a lot of people I know out in the crowd. Some people from the Whistler Mountain Ski Club. I'm going to have a bunch of family out there.

"After spending a whole winter last season on the road and without any crowds, this is going to be real special. Especially coming off those good memories that I have from the last time we were here."

Alpine Canada, along with the world governing body of skiing (FIS), requires all participants, staff and volunteers to be vaccinated 14 days before the event and are required to show proof of vaccination.

Accredited personnel are also required to show proof of a negative PCR test taken within 72 hours of arrival at the event.

Masks are required indoors and in crowded outdoor spaces. The athletes will be given more space in Lake Louise's chalet to don their gear while maintaining distance from others.

The first World Cup races in Lake Louise were held in 1980. The resort became an annual stop on the international circuit after 1992.

This report by The Canadian Press was first published Nov. 22, 2021.