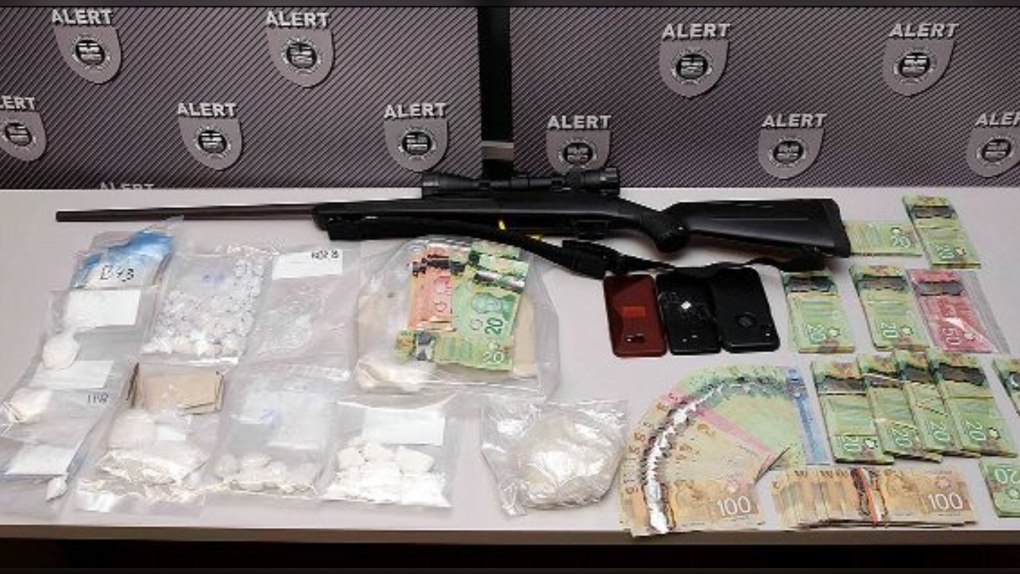 Drugs, cash and weapons seized during the search of a home in Brooks on Oct. 24 (ALERT)

CALGARY – Five people face charges following an investigation into the drug trade in southeast Alberta that culminated in the search of a home in Brooks.

The Alberta Law Enforcement Response Team (ALERT) began its investigation into suspected drug trafficking in Medicine Hat and Brooks in July. On Oct. 24, officers searched a residence in Brooks that resulted in the seizure of:

According to ALERT, the total street value of the drugs exceeds $50,000.

Three men were arrested at the time of the search and were subsequently charged.

Kyle Potts, 33, has been charged with:

The charges against David Boyer, 33, and Daniel Morrison, 35, include:

ALERT officials say Potts is believed to have been at the centre of the drug trafficking network.

As a result of the search, warrants were issued for 27-year-old Dallas Johnson and 33-year-old David Kearley. Medicine Hat Police Service members arrested Johnson on Oct. 25 and Kearley on Oct. 30. Both have been charged with offences related to drug trafficking.

"These are significant amounts of drugs and cash to take out of the hands of criminals," said Staff Sgt. Kelsey Fraser of ALERT Medicine Hat in a statement. "Along with the weapons seized, this is a good step toward making the communities of both Brooks and Medicine Hat safer places to live."