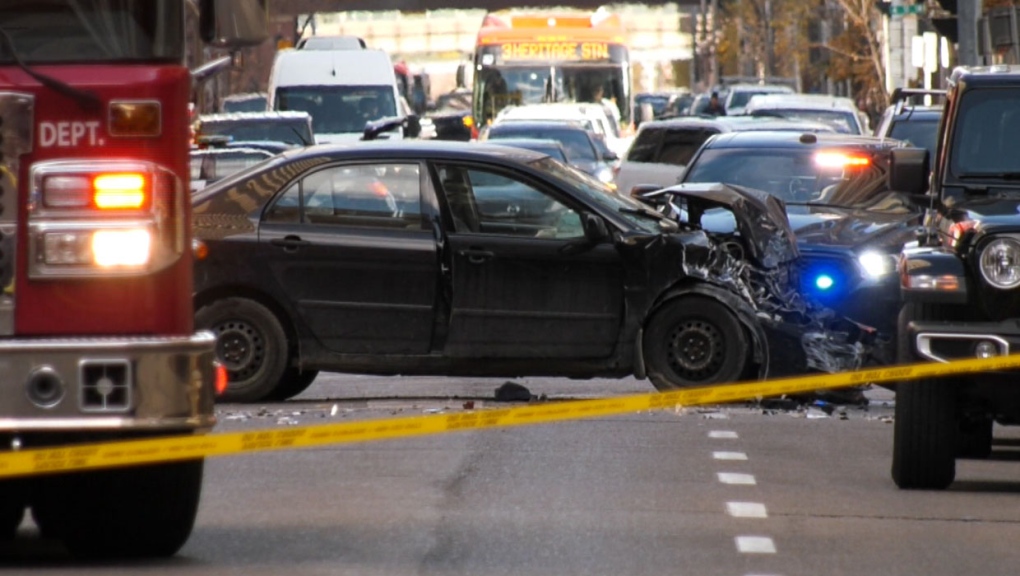 The driver of the vehicle, a 22-year-old male, and his passenger, a 28-year-old female, were both sent to hospital after crashing into another vehicle at the scene.

CALGARY — Two people have been charged in connection to a downtown incident on Saturday that saw a Calgary police officer open fire on a stolen car believed to be heading toward a military parade.

Police attending the Freedom of the City parade first noticed a suspicious vehicle around 3 p.m. at the intersection of Sixth Street and Eighth Avenue S.W. that was trying to drive around one of the barriers.

When police tried to block the black 2008 Toyota Corolla with a patrol vehicle, the suspect vehicle did a U-turn in an attempt to get away.

A 12-year member of the police force then fired three shots. The suspects kept trying to flee heading north, but crashed into a van.

The driver and the passenger, Bogdan Ferdinand Diordiev, 21, and Alana Mae Steeves, 28, were taken to hospital in stable condition.

Both the licence plate and the car were stolen in separate incidents, police said.

Diordiev faces seven charges, including dangerous operation of a vehicle, failing to stop at the scene of an accident, flight from police, possession of stolen property and driving an uninsured motor vehicle.

Steeves is charged with possession of drugs.