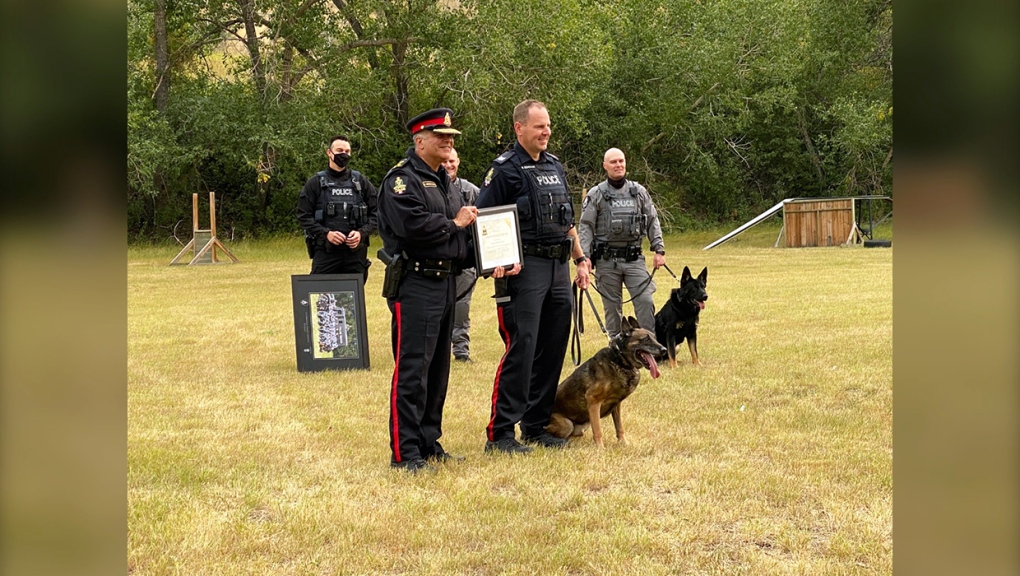 CALGARY -- A retiring Lethbridge police dog is also part of the welcome-wagging now that their newest K9  has officially joined the force.  LSD Ymos has been with LPS for the past eight years. The 10 year old police pooch and his handler Sgt. Rick Semenuik have a bond that can’t be bitten into. Semenuik said they’re together both on and off the clock.

Semenuik said Ymos has become part of his family. Ymos is definitely leaving some big paws to fill but the newest graduate, Zap, trained for 20 weeks and just received his badge. His Handler Cst. Spencer Hodsgon said he first got Zap almost a year ago and they’re already been successful.

“Early on in our career we’ve already had about 10 catches and that was within the first two months…” he said.  “That was a big positive for me, just when we talk about getting to see how we’ve grown as a team.”

Hodsgon said two year old Zap is trained in evidence searches, criminal appreciation and many other things but his favourite skill is tracking.

“When he starts tracking his shoulders hunch back and he starts digging and it’s basically taking me for a ride and there are things that I have to watch for when he is tracking…” He said “but real world is to go pick up a scent and get us to the person that left as long as we’ve got a good start point.”

Hodsgon said Zap also knows what hug means but that’s just a command the duo share.  As for Ymos, he can start enjoying his dog days, but Semenuik said his four-legged partner is still in work mode.

“He still very high drive very high tempo so he hasn’t quite relaxed too much yet.”

Lucky for Ymos, he can live a pampered pet life with his best friend Semenuik since officers can purchase their companions for $1 and most of their expenses are covered by the city. It’s something that Zap and Hodsgon can look forward to but for now they are exciting about the new journey they’re em-barking on together.