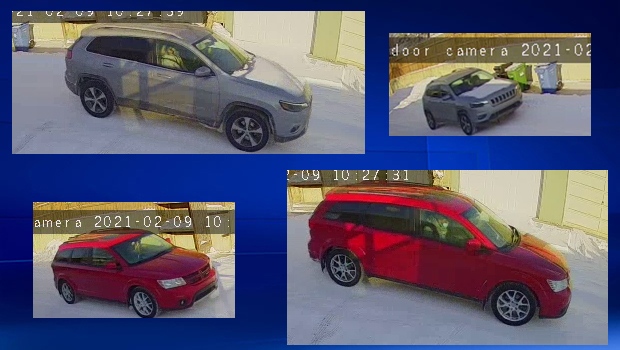 Police released CCTV images of the suspect vehicles in hopes that someone may have information that could help with the investigation.

CALGARY -- Calgary police are releasing photos of two vehicles believed to be involved in a shooting that sent two men to hospital in February in the hopes someone will be able to identify the suspects.

Police were called to the Peter Lougheed Centre on Feb. 9, 2021 at about 11:30 a.m. after two men showed up at the facility with gunshot wounds.

Investigators think the shooting happened in an alley in Rundle.

Police say one of the victims was shot after he refused to hand over the keys to his truck and trailer to two unknown men, who threatened him with a shotgun. They believe the second victim was shot following a struggle with the suspects.

The offenders fled the scene and the two victims took themselves to hospital for treatment.

"This was a brazen shooting that created significant risk for residents in the area. Assistance from the public is critical in helping us solve these investigations and keep our communities safe," said Staff Sergeant John Szczupack of the Calgary Police Service District 4 General Investigations Unit in a release.

Police believe the shooting was targeted and after sifting through hours of surveillance footage, have released images of the two vehicles that fled the area.

The two vehicles are described as; a red Dodge Journey and a newer model light-grey Jeep Cherokee, with an air freshener on the rear-view mirror.

Anyone with information about the shooting, who recognizes the vehicles or remembers seeing them in the Rundle area on the day of the shooting and has not already spoken with investigators is asked to contact police at 403-266-1234, 1-800-222-8477 or www.calgarycrimestoppers.org.