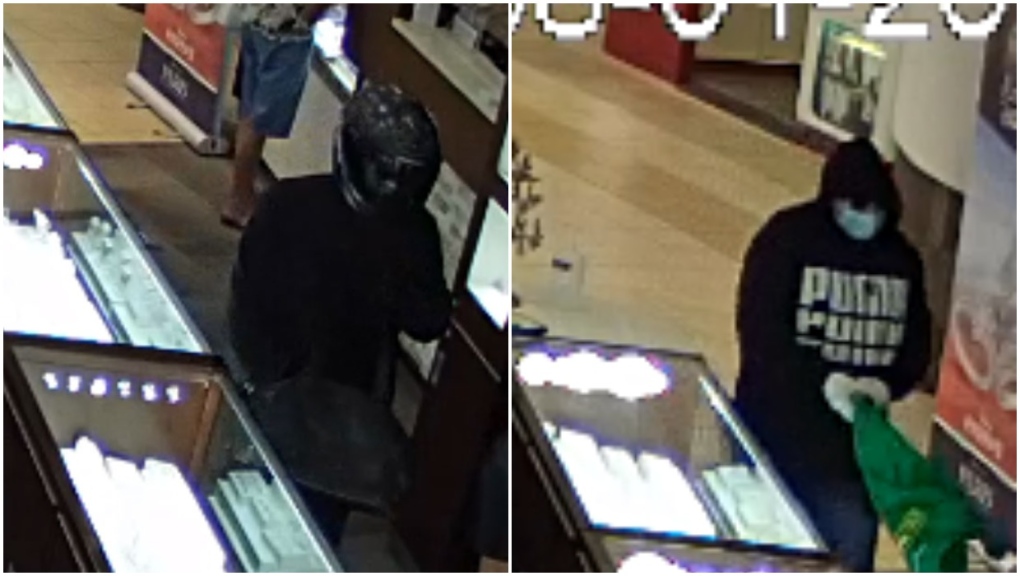 Calgary police are looking for these two men, believed to be behind a jewellery store robbery Saturday afternoon. (Supplied)

CALGARY -- Calgary police have released photos of two suspects they believe were responsible for a robbery that occurred in Sunridge Mall Saturday afternoon.

Officials say the images of two masked men were captured on security video while the crime was being committed.

They say the suspects entered Sunridge Mall at about 1:30 p.m. and proceeded to Paris Jewellers.

Once inside, the pair allegedly set off a canister of tear gas and used pepper spray on the employees before stealing a number of items from the store.

Police say the suspects also threatened staff with firearms before leaving the store and the mall, fleeing the scene in a brown or gold-coloured SUV.

EMS attended the scene after the robbery and treated a number of people while the CFD worked to ventilate the mall.

The first suspect is described as a Caucasian male who was wearing a surgical mask over his face.

He was also seen wearing a Puma-branded hoodie with hood up, blue jeans and white gloves. Investigators say he was carrying a green shopping bag.

There is no information on the value of the merchandise taken from the store.

Anyone with information should call the Calgary Police Service non-emergency line at 403-266-1234. Tips can also be submitted anonymously to Crime Stoppers through any of the following methods: