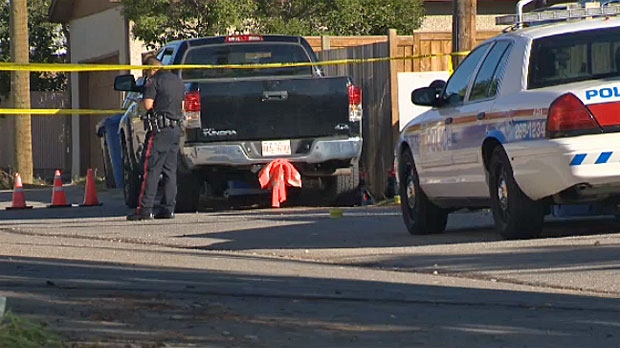 A 39-year-old man died after he was shot outside a residence in the city’s northeast on Saturday morning and is Calgary’s 27th homicide of the year.

The man was taken to hospital where he was pronounced dead.

Police say they believe the man had left his home and was in the back alley when he was shot.

Police say a suspect has not yet been identified but that they believe it was a targeted attack.

“We have information that there was a silver SUV seen leaving the scene and we’re in the process of determining the relevance of that information to our investigation,” said CPS S/Sgt Doug Andrus from the Homicide Unit.

Antonio is known to police and was charged last year in connection to a large methamphetamine bust.

"We believe this is a targeted attack and determining the motive will be part of our investigation and as with all homicides we will be looking at the victim's background to assist us with determining motive," said Andrus.

Shots were also reportedly fired at a home on Maidstone Cr. N.E. a few minutes after the murder took place.

Originally, police thought a bullet entered one home and another was lodged in a second house but they were able to determine that only the first home was hit.

They are working to see if the damage to the first home is connected to the homicide.

An autopsy to determine the cause of death is expected to be complete on Tuesday.

Police are asking anyone with information to contact them at 403-266-1234, the Homicide Unit Tip Line at 403-428-8877 or Crime Stoppers anonymously using any of the following methods: