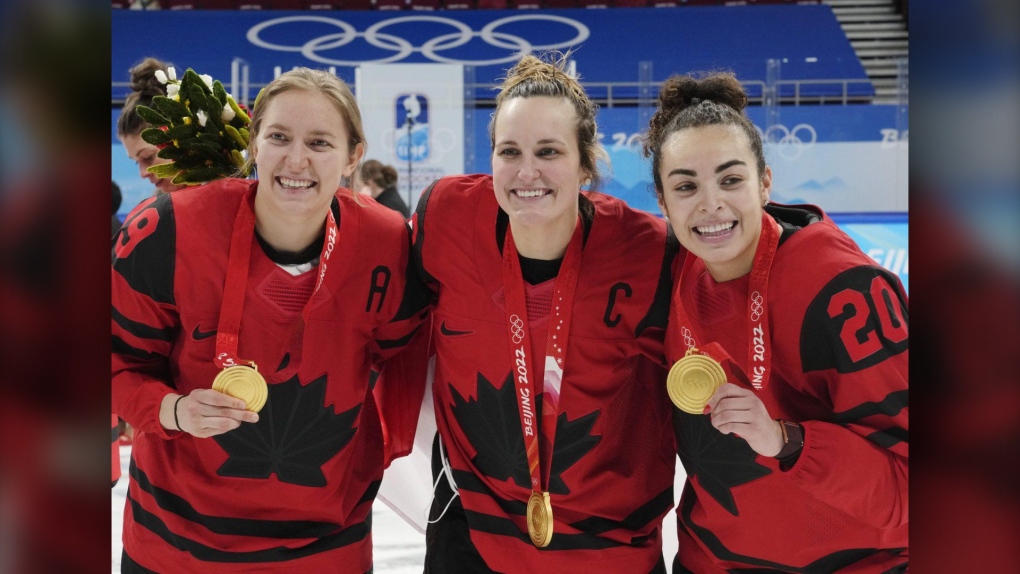 Led by captain and golden-goal scorer Marie-Philip Poulin, Canada's roster for the women's world hockey championship resembles the lineup that won an Olympic gold medal in Beijing in February.

Canada opens the first women's world championship held in the same calendar year as an Olympic Games on Aug. 25 against Finland in Herning, Denmark.

The Canadians are also the defending world champions having beaten the United States 3-2 in overtime in last summer's final in Calgary.

Canada will attempt to win world titles in back-to-back years for the first time since a run of three straight gold from 1999 to 2001.

Poulin scored the overtime winner last year in Calgary and also scored twice in the Olympic final in Beijing.

"We had a great year, we had the world championship, we had the Olympics, we had a moment where we celebrated, but now we're back to work," Poulin said.

Eighteen players among the 23 named to the world championship roster Monday won Olympic gold just six months ago in Beijing under head coach Troy Ryan, who remains behind the bench in Denmark.

"I think what we had in Beijing was really special," forward Blayre Turnbull said.

"We want to keep building on that and see how far we can push ourselves and push our team.

"Although it was a pretty quick turnaround, I think don't think there was much hesitation with the older girls on the team to get back here and to get back to this environment."

Forward Brianne Jenner, who was named the Olympic tournament's most valuable player, as well as starting goaltender Ann-Renée Desbiens are also among the returning players on the roster announced by Hockey Canada.

"I love my teammates and I love what we're doing here," Jenner said.

"I love the culture we've created and the direction we have for this season and the years moving forward. I just want to be a part of it."

The roster was chosen following a two-week, 142-player camp in Calgary that included under-18 and under-22 prospects.

Spooner is pregnant. Thompson, named to the Olympic tournament all-star team, has been accepted into medical school.

"We want our athletes to be happy. They have to be satisfied and happy in their personal lives in order for them to be able to perform and impact our program as well.

"Of course, we would have loved to have all of them back, but it opens the door to other athletes who will get the opportunity to represent Canada."

Forwards Victoria Bach, Kristin O'Neill and Jessie Eldridge, who were released from Canada's centralized roster last winter before the Olympic Games, were named to the world championship squad.

Forward Sarah Potomak is also back in the lineup. She played in the 2017 world championship and was released from the 2018 Olympic roster during centralization.

Veteran Meaghan Mikkelson returns to Canada's blue-line after rehabilitating a knee injury that kept the 37-year-old out of a fourth Olympic Games.

The International Ice Hockey Federation added a top-tier women's championship into an Olympic year largely to make for more streamlined promotion and relegation from lower-division championships, but also to encourage federations to invest more consistently in women's hockey.

The IIHF has barred Russia from competing in international hockey tournaments because of that country's invasion of Ukraine.

Czechia, Germany, Sweden, Hungary and host Denmark comprise the sixth to 10th seeds in Pool B in Frederikshavn.

The 2020 and 2021 world championships in Halifax and Truro, N.S., were called off with the latter rerouted to Calgary last summer.

That reshuffling has Canada playing for a third major title in the span of a year.

Canada's under-18 and developmental teams host the United States in three-game exhibition series Wednesday to Sunday in Calgary, while the national squad heads to Copenhagen for a pre-tournament camp and exhibition games Saturday against host Denmark and Aug. 23 versus the United States.

Combining the talent pool from the under-18 to the senior levels in a massive camp for the first time, as well as selecting rosters for international competition, gave Kingsbury a head start on planning for the 2026 Olympic Games in Milan and Cortina, Italy, and beyond.

"This is an opportunity to really set our depth chart from top to bottom," Kingsbury said.

This report by The Canadian Press was first published Aug. 15, 2022.

'I'm going to be the premier of all Quebecers': Legault elected with majority government

CTV News has declared the Quebec Liberal Party (PLQ) will retain its official Opposition status, and Party Leader Dominique Anglade has been re-elected.

Toys 'R' Us has released a list of the top toys of 2022 ahead of the holiday season.

Two winning lottery tickets in Ontario are on the verge of expiring.

The Iranian government's crackdown on protesters is likely to 'intensify' in the coming days, despite sanctions from Canada and international condemnation, an expert says.