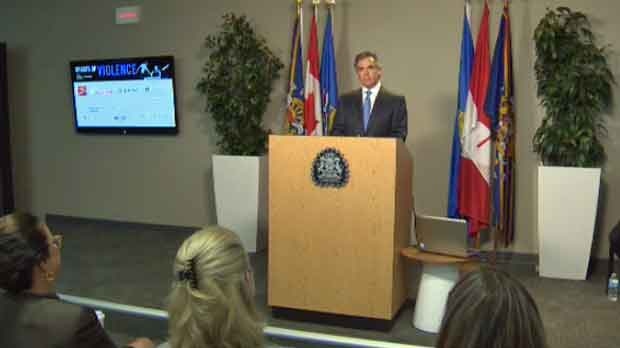 Jim Prentice makes the announcement in Calgary on Friday.

A major cultural event and fundraiser was announced in Calgary on Friday that addresses violence against women and girls.

The Atlantic Ballet Theatre of Canada’s award-winning multimedia ballet, Ghosts of Violence, focuses on intimate-partner violence and is part of the group’s Celebrate Courage project.

The performance is a first for Calgary and will be at the Jubilee Auditorium on April 5, 2013.

The goal of the initiative is to educate youth and raise public awareness in the city about the issue of violence against girls and women.

The tour group is crossing the country to 40 communities over three years and has performed in six provinces and 19 communities so far.

A number of organizations that are working to end violence against females in Calgary will benefit from ticket sales.

“50 percent of the ticket proceeds will go back into the community to support the Calgary Domestic Violence Collective and also partner organizations,” said Prentice.

For more information and to purchase tickets, visit the Atlantic Ballet Theatre of Canada website.