The man accused of killing Nathan O’Brien and his grandparents Alvin and Kathy Liknes went before a judge in Calgary on Tuesday to determine if there is enough evidence in the case to move forward with a trial.

The three were reported missing from the Liknes' Parkhill home in June 2014 by Nathan's mother who went to pick him up from a sleep over and found no one at home.

An AMBER Alert was issued for the missing boy and a massive search was launched to locate the trio.

Garland was identified as a person of interest shortly afterwards and later charged in the deaths of the three.

The investigation led detectives to search a property near Airdrie, owned by Garland’s parents, on two separate occasions; in 2014 and more recently in March of this year.

The bodies of the Liknes’ and Nathan have not been found but police say evidence collected points to their deaths.

The courtroom was packed on Tuesday for the preliminary hearing, which will determine if there is enough evidence to send the case to trial.

Garland was led into the courtroom in a blue jumpsuit and showed no emotion.

The court has implemented a publication ban on the proceedings.

“I applied for a ban in publication because as this is just a preliminary inquiry we don’t want any of the evidence disseminated out, should this matter ever go to trial, so there isn't any contamination of any of the evidence for some proceeding down the road,” said Kim Ross, legal representative for Douglas Garland.

The hearing is expected to last two weeks. 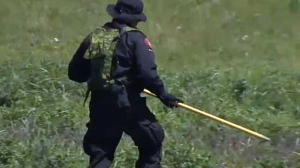