More than 100 Calgarians gathered Saturday to show their support for Ward 4 Coun. Sean Chu following weeks of repeated calls for him to resign amid sexual assault allegations of a 16-year-old girl in 1997.

Supporters of Chu say he was duly elected and that his alleged activity with a teenage girl during his tenure as a Calgary police officer was resolved more than two decades ago.

“It’s water under the bridge,” said Gerald Walton, who participated in a show of support for Chu outside of Olympic Plaza.

“The only reason they brought up this case was political assassination. He’s a devoted, hardworking councillor, he cleaned up our whole neighbourhood and deserves to sit on council. Those vultures against him should put their coats on, go home and allow him to just do his job.”

Co-organizer of the rally, Cynthia Shi agrees that sexual assault allegations against Chu should not be the focus of his next four years.

“It's not for me to let someone resign or to force them out of their job,” Shi said.

“I think Sean did a good job and we want him to do a good job continually on behalf of people living in Calgary during this tax hike emergency, not a climate emergency.”

Chu was contacted by CTV News on Saturday, but declined to comment.

'SHE WAS 16!' – COUNTER-PROTESTERS DEMAND RESIGNATION OF CHU

Several counter-protesters gathered across the street on the steps of Calgary city hall to send a message to those in support of Sean Chu.

Many people could be heard yelling ‘she was 16!’ and ‘victims over systems!’

Krista Li participated in the protest, bringing along her two daughters to show them that sexual assault victims should be believed and given a voice.

“So if we want a better Calgary, if we want to better Alberta, it’s very important that we stand up against what Sean Chu represents, which is a very corrupt system.”

Li adds that Chu was democratically elected, but voted in under false pretenses as Calgarians in Ward 4 weren’t informed about his sexual assault allegations until after advance polls.

“She was 16, that is the only message, and I would ask anybody standing on the other side of that road that if this was your daughter, how would you feel?” 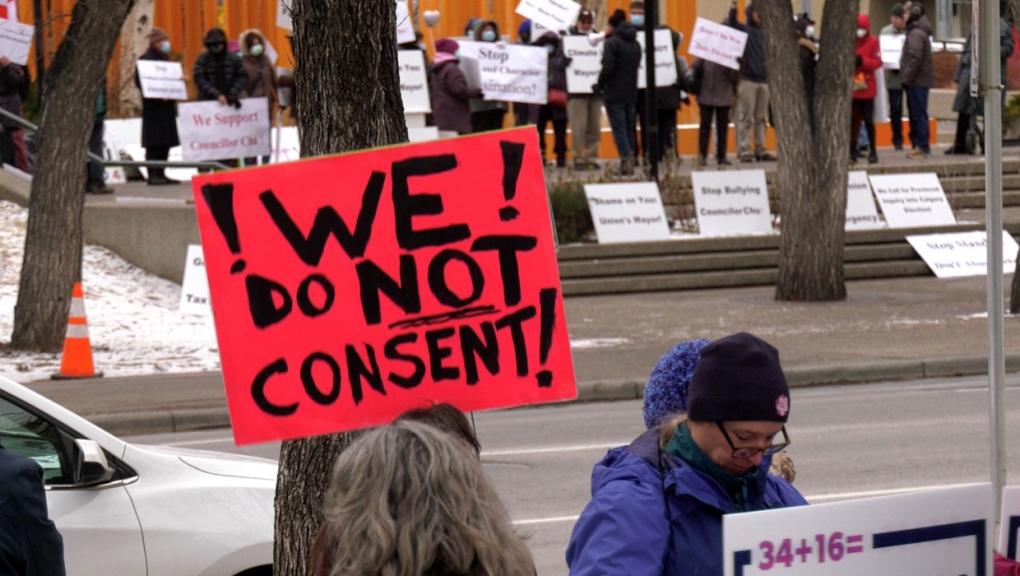 Steven Harding, a Ward 4 resident who had previously voted for Chu, also attended the protest.

He demands Chu resign his position so his city councillor can have an actual voice and a seat at the table following Chu’s removal from important city committees.

“I don't have any representation in the city,” Harding said.

“And that’s what pisses me off here about the people on the other side of this rally that still think he should be in that position of political leadership. There is no way that he should be representing anybody.”

Political analyst with Mount Royal University Lori Williams says Sean Chu initially misled his voters about the details of what happened, leading to a breach of trust and a favourable result by a slim margin of about 100 votes at the polls.

“It’s a lack of accountability and transparency and questions about his character, about his judgment are matters that are currently very important to a lot of voters,” Williams said.

“There are people who would have voted differently if they had this information. There are also people who were very disappointed that he was not forthright in providing information when it first was disclosed.”

Williams adds that Chu is now placed in a very difficult situation because his lack of trust amongst his council members and constituents has occurred at the beginning of his four year term.

"It is going to be very difficult and the prospect of four years now showing him to not be able to adequately represent his constituents is raising serious questions,” she said.

McIver sought external advice from law firm Brownlee LLP, which delivered the opinion that McIver isn't authorized to fire Chu based on behaviour that took place before he was elected to council.

According to court documents, Chu met with a 16-year-old girl on Aug. 12, 1997 at a restaurant. He was never criminally charged, but was found guilty of one count of discreditable misconduct for caressing her leg and reprimanded for five years.