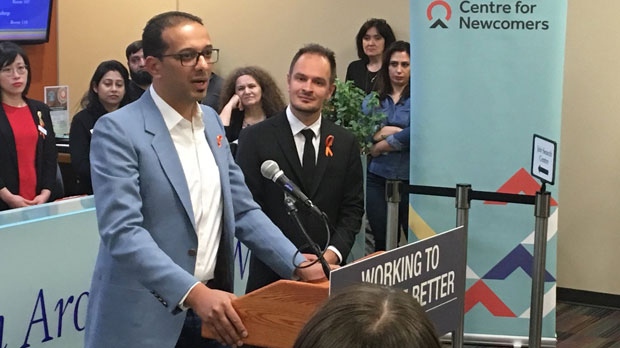 The Alberta government has changed the rule that barred refugee claimants from getting driver's licences before they had their hearing.

The Alberta government is moving ahead with a plan that will remove a major roadblock that many new refugees face when they first come to Canada and need to provide for their family.

The new process allows claimants to apply and test for a driver’s licence for a one-year term while their refugee application is still being reviewed by the federal government.

Under the previous system, refugees were left waiting to apply for driver’s licences until after their claim had been heard, that can sometimes mean months held in limbo.

“I’ve heard from many of these new Albertans who are unable to work because they’ve not been allowed to get a driver’s licence. That’s not right and that’s why we’re taking action. Our government has the backs of working people and these changes will make life better for refugees and their families,” he said in a release.

Applicants will still need to undergo the same knowledge and testing process as all Albertans, including the GDL program. They will need to provide their work or study permit, refugee claimant documentation and proof of Alberta residency, usually a bank statement or utility bill, before commencing.

Irfan Sabir, the Minister of Community and Social Services, says the province made the change to welcome refugees.

“[We] believe all Albertans should have access to opportunity. This change is long overdue and will allow many families to have a better life in our province.”

Before this change, Alberta was the only province in Canada to block refugees in such a way, making it more difficult for them to adjust to their new life and provide for their families.

Many refugees, like Mahmoud Al-astal from Palestine, say the rule change will help him and other claimants get a job and care for their family better than they could without access to a vehicle.

Al-astal says the previous rules prevented him from taking part in one of his family's major milestones.

"My wife was pregnant so when she was in labour, it was in the middle of the night. I did not have a car seat so I could not order a taxi. I had a volunteer but the volunteer was harried so she forgot the car seat. So I had to be at the house with my daughter and let my wife go with the lady alone."

He said his wife was in labour the rest of the night and delivered their second child without him being there.

Al-astal says the change will allow him to get a driver's licence and remove the barrier in his way of being gainfully employed.

"On behalf of all refugee claimants, on behalf of my daughter, my wife and my newborn baby I want to thank Mr. Malkinson for doing this change. This change will make life better for people."