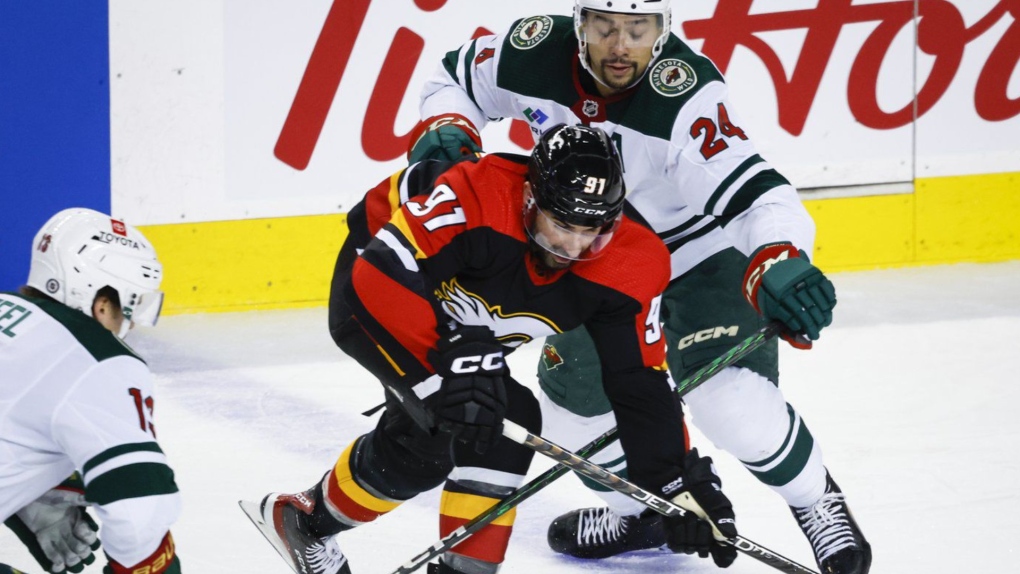 Rasmus Andersson notched the game-winner at 15:57 of the third period and added two assists as the Calgary Flames overcame a disastrous start in a 5-3 comeback victory over the Minnesota Wild on Wednesday.

Tyler Toffoli with a pair, including an empty netter, Nazem Kadri and Blake Coleman also scored for Calgary (13-10-3). Elias Lindholm had three assists.

The Flames have won three games in a row and earned eight points on their five-game homestand.

Kirill Kaprizov extended his goal streak to seven games for the Wild -- tops in the league this season. Mason Shaw and Jon Merrill also scored for Minnesota (13-10-2), which had its four-game winning streak come to an end.

Making his sixth start in the past eight games, Dan Vladar gave up two goals on his first three shots. He settled in and finished with 25 saves for his fourth straight victory, improving to 5-4-1 on the season.

Minnesota was trailing 3-2 when they tied it at 15:45 when Merrill's point shot deflected in off the stick of Flames defenceman Chris Tanev.

But just 12 seconds later, a Wild turnover behind their net ended up on the stick of Andersson, who cut across the crease and used his backhand to put the puck just inside the goalpost.

Kaprizov entered the game on an offensive tear with 19 points in his past dozen games. He extended his point streak to 13 games when he tipped in a Matt Dumba point shot just 1:27 into the game.

Both of Kaprizov's streaks are franchise records.

Less than a minute later, the Wild broke out on a 3-on-1 with Shaw one-timing Connor Dewar's cross-ice pass past Vladar.

On a power play that carried over from the first period, Kadri got Calgary on the scoreboard just 16 seconds into the second period when he redirected Lindholm's hard pass past Fleury.

Coleman tied it after a goalmouth scramble at 1:37.

The Flames moved in front at 3:11 with another power-play goal and another deflection. Toffoli got a piece of Andersson's heavy slapshot from the blue line.

The Wild had three power-play opportunities later in the period but were thwarted by the Flames' penalty kill. Entering play, Minnesota was 8-for-19 with the man advantage over the past six games.

To lose a game in which they scored the first goal and led after the first period is a rarity for the Wild.

Minnesota entered the game with an 8-1-2 mark when scoring first and an 8-0-1 record when leading after 20 minutes.

Calgary improved to 4-6-1 when surrendering the first goal and 3-6-2 when trailing after the first period.

After a seven-game stretch where the Flames' power play was just 2-for-21, they've scored two goals in each of the past two games, going a combined 4-for-9 over that span.

Wild: Head to Edmonton to take on the Oilers on Friday.

Flames: Open a three-game road trip on Friday against the Columbus Blue Jackets.