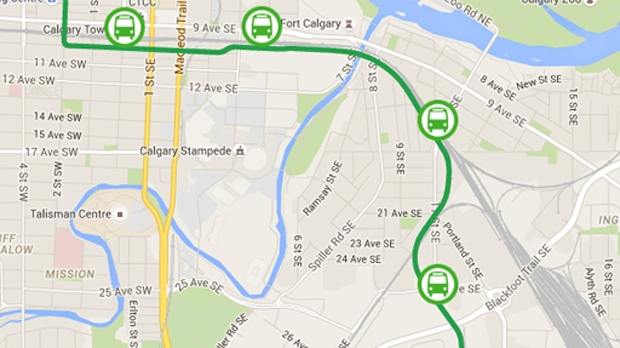 Map of the Green Line LRT route through the East Village, Inglewood, Ramsay and Alyth/Bonnybrook (City of Calgary)

The Member of Parliament for Calgary Nose Hill, Michelle Rempel, expressed her frustrations on Thursday morning regarding the lack of progress with the controversial Green Line LRT project.

Rempel told CTV News she fears for the project's future. "City council has spent $370 million on a project that they now want to pause, which means it will likely never get built."

Rempel says north-central Calgary, which includes the riding she represents, has one of the highest ridership of existing transit in the city, yet is one of the most underserviced.

"Frankly, it’s their turn for this type of infrastructure. This is why, four years ago, I was proud to help deliver nearly $1.5B of federal funds to build the Green Line to service our community."

She claims that city politicians have decreased the reach of the project by about 75 per cent while increasing the cost by a factor of four, a move that, in her mind, is unjustified.

"I’m really frustrated and I think the people in my community, who are hardworking taxpayers expect a lot more."

"All levels of government need to get on board with this project and immediately find solutions to any problems rather than looking for ways that severely short change the residents of north-central Calgary."

In June, MacIntyre provided city council with an update on phase one of the Green Line project, explaining that administration had new concerns with plans for a four-kilometre tunnel underneath downtown and the Bow River. She also said the $4.9-billion dollar first phase could be delayed until 2027.

Council will soon be discussing a motion from Ward 8 councillor Evan Woolley to put the brakes on the Green Line project.

Rempel thinks that north-central Calgarians have waited long enough.  "City councillors voted for this option, which is the most expensive and least effective, and every Calgarian should be holding them responsible for this decision."