Rink rules: How parents and players are navigating return to ice 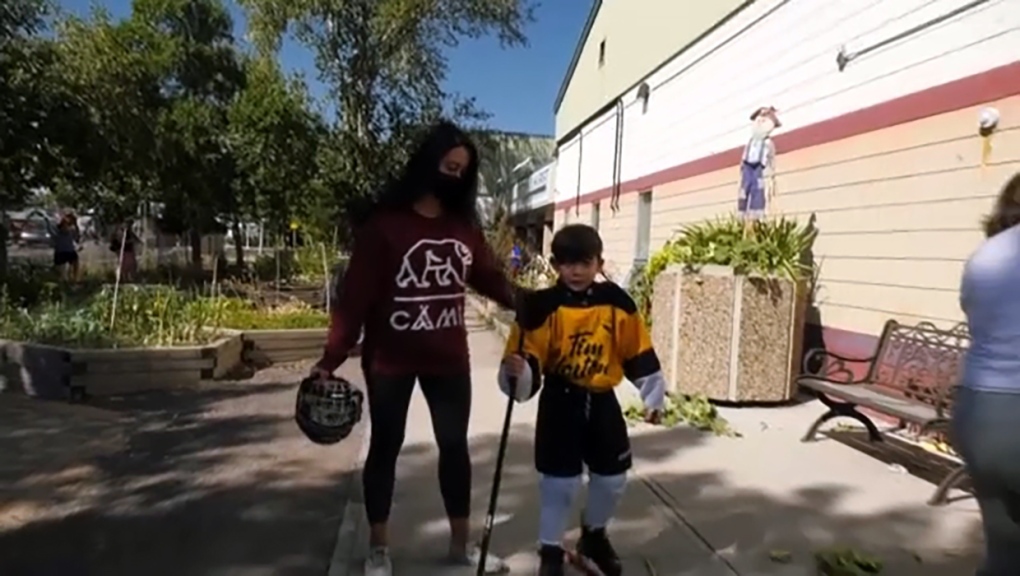 Leilani Saad's seven-year-old son can't wait to start hockey, but because of cohort regulations, she won't be able to watch him play.

“We want him to be able to be with other kids and understand the importance of team work and team sports," Saad said, in an interview with CTV News. "Especially since he hasn’t been around other kids for a while, this will help get him back into the swing of things.”

Calgary’s community hockey associations are easing into a new season, their first time back on the ice since the pandemic abruptly ended play in the spring.

Most are abiding by provincial cohort recommendations limiting playing groups to 50 or fewer, which includes not only the entire team, but coaches and all other teams they’ll play against.

Many organizers are optimistic about the relaunch, given the success of summer sports , played within cohort rules.

“It wasn’t easy,” he says, “We cut back on coaches, sanitized equipment and moved the umpires from behind the plate to behind the mound to get them out of the cohort...but we had no cases (of Covid-19)...I think everyone was just glad to be able to play some baseball.”

Alberta’s chief medical officer of health, Dr. Deena Hinshaw, implemented the rules for the return of sports this summer and says she’s glad they worked out, telling CTV news, “We’ve been pleased with the success of our sports model cohort.”

However, hockey will present more complications to families - unlike baseball and soccer, it is played inside which means more precautions and more limits on who can watch.

Under current health guidelines, the province allows up to 100 spectators inside a rink, as long as they’re masked and distanced.

The City of Calgary is adapting those guidelines for games played in their facilities- but staff at other community and private rinks say that’s not always possible.

Many are forbidding parents from coming inside to watch their children play, at least for now.

“Do you know how long it will take to properly sanitize the arena if we’re letting 100 new people in every hour?” One rink manager tells CTV, “We are already spending most of our time cleaning. We don’t have the money to hire more staff unless we charge hockey associations more to play. Also, when would we do it? Do we cut ice times by 15 minutes? Parents won’t like that either. Also, how can we track all the people who’ve come in and out of the building if there is a COVID case?”

Kevin Kobelka with Hockey Calgary says many families are asking what can be done - but he says this is outside the association’s purview.

“We book ice from the arenas and they have the right to make their rules,” he says “The province offers guidance for sports cohorts and facilities - we can pass that on to people but its up to the rinks and what they are are comfortable with.”

Similar questions have been raised about inconsistencies with cohort requirements in different associations.

However, while the province recommends people limit their cohorts, it doesn’t require it, saying families can decide what they’re comfortable with.

While the province isn’t ruling out eventually boosting the size of cohorts or changing the rules governing them, it’s says now isn’t the time.

“It’s a bit premature to consider expanding cohorts, “says Dr. Hinshaw “Until we have the chance to monitor impact of kids going back to school and if that impacts our transmission rates.”

Meanwhile, Leelani Saad says she hopes she can watch her son play this year - but if barring parents from the rinks is the only way kids can play, she supports it.

“There are pros and cons,” she says “ The cons will be we won’t really see him progress and where he can improve...but the pro is he can do his own thing out there.”

Many hockey organizers are suggesting following the province’s lead and simply waiting a month or two, seeing how school re-entry goes, then revisiting the rules in the winter.

Still, at least one arena operator says he’s expecting the ban on parents to last.

“I’m assuming this is the rule for at least this year,” he says , “At least then we know the kids can play, Better that than us opening it all up, seeing an outbreak , and hockey’s suddenly cancelled for everyone.”