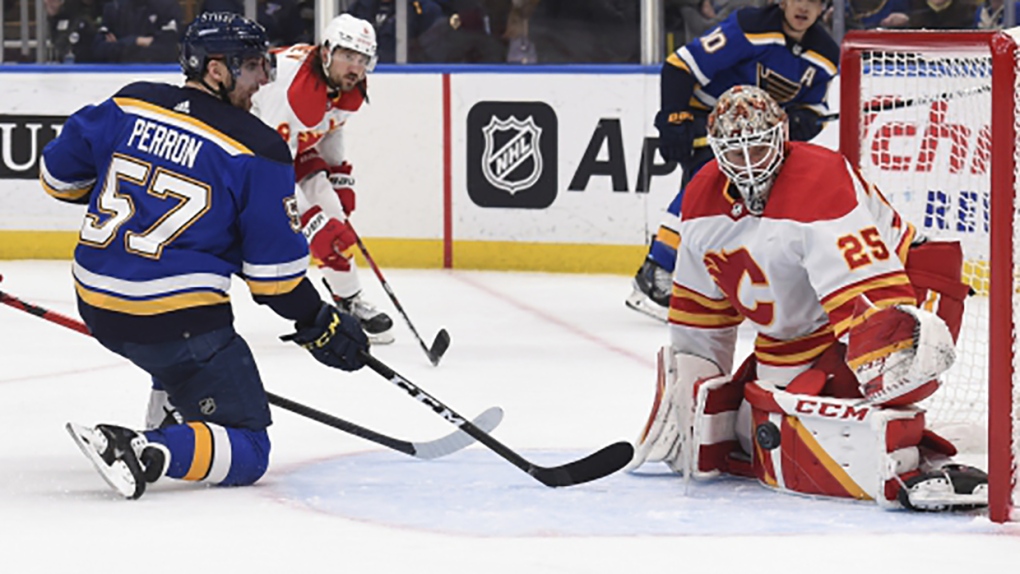 Brandon Saad scored twice and had an assist, Ville Husso made 28 saves to win his sixth consecutive start, and the St. Louis Blues cruised to a 5-1 victory over the Calgary Flames on Thursday night.

Brayden Schenn had a goal and an assist, and Jordan Kyrou and Ryan O'Reilly also scored for St. Louis.

The Blues got some revenge for a blowout loss at Calgary three days earlier. The Flames outshot the Blues 48-21 in their 7-1 victory over the Blues on Monday.

Husso, who made his fourth start in five games, has won all six of his starts since returning from a lower-body injury on Jan. 7. He has played in five consecutive games; he came in relief of Jordan Binnington for the third period in Monday's game.

Mikael Backlund scored the lone goal for Calgary, which had 29 shots a day after a 6-0 win at Columbus during which the Flames had a franchise-record 62 shots - the highest total in a regulation NHL game since March 1989.

St. Louis struck first when Saad scored at 6:15 of the opening period. Schenn fed a streaking Saad just inside the blue line on the left wing, and Saad buried a wrister from the left faceoff circle to beat Jacob Markstrom. Torey Krug made the outlet pass up the middle to Schenn to start the play.

Calgary tied it at one apiece when Backlund scored from a tough angle at 10:34. Andrew Mangiapane passed the puck to Backlund, who hit a wrist shot from the side of the goal at the bottom of the right circle.

St. Louis responded by scoring the go-ahead goal at 13:59. Schenn got the puck near the red line from Niko Mikkola and raced up the ice, scoring in the upper right corner of the net.

Saad's second goal gave St. Louis a 3-1 lead at 9:57 in the second. The puck came off a Flames stick from behind the net and Saad, in the slot, quickly popped it in.

St. Louis scored twice in the third period. From behind the net, Robert Thomas found Kyrou in front of the net. Kyrou scored at 4:10 for a 4-1 lead. Kyrou has seven goals and seven assists over his last 11 games.