The concrete is cracking and crumbling around the upper ring of the Scotiabank Saddledome's roof, but the building is still structurally sound, city officials say.

According to engineering reports from a third party, first obtained and reported on by CBC News, the concrete roof of Calgary's arena is worsening and should be inspected multiple times a year.
"The recent reports we've received from the Saddledome show that it's structurally sound for public use," Michael Thompson, the city's general manager of infrastructure services, told journalists on Wednesday.
Netting has been installed around the outer ring, though gaps are visible in the cracked concrete where chunks have either been removed or fallen off. 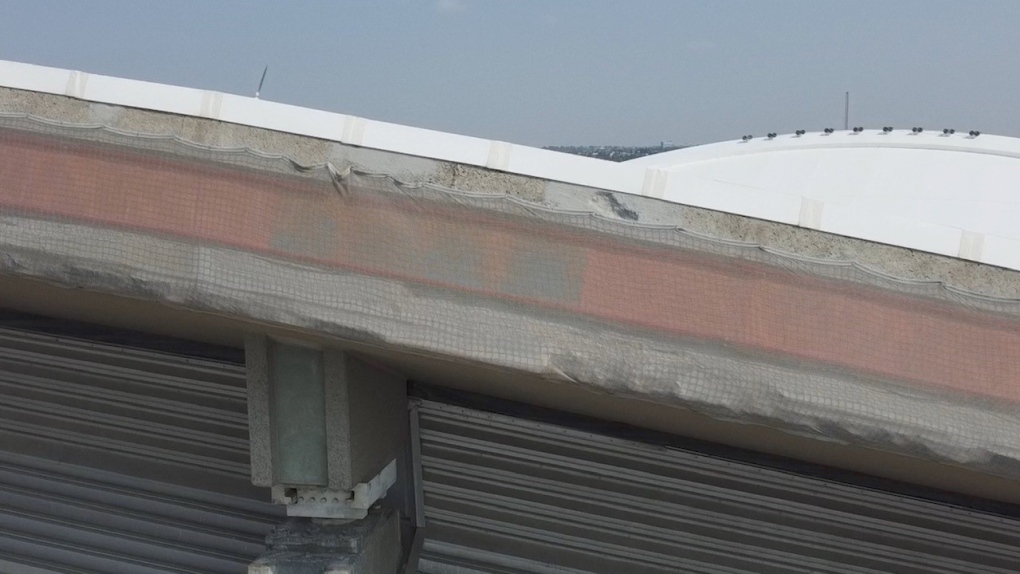 At 40 years old, the Scotiabank Saddledome in Calgary is showing its age.
"The Saddledome is approaching 40 years in age and concrete weathers as it starts to get old," said Thompson.
"So we're seeing that on the Saddledome, similar to any of our other concrete bridges or buildings we have in the city," he said, adding that the city has money budgeted to repair Calgary's aging buildings and bridges.
Sonya Sharp, the city councillor who chairs a committee exploring a deal to build a new arena, said she had not been made aware of reports into the Saddledome's degrading concrete until media stories emerged, but she will be asking administration to share it with council. 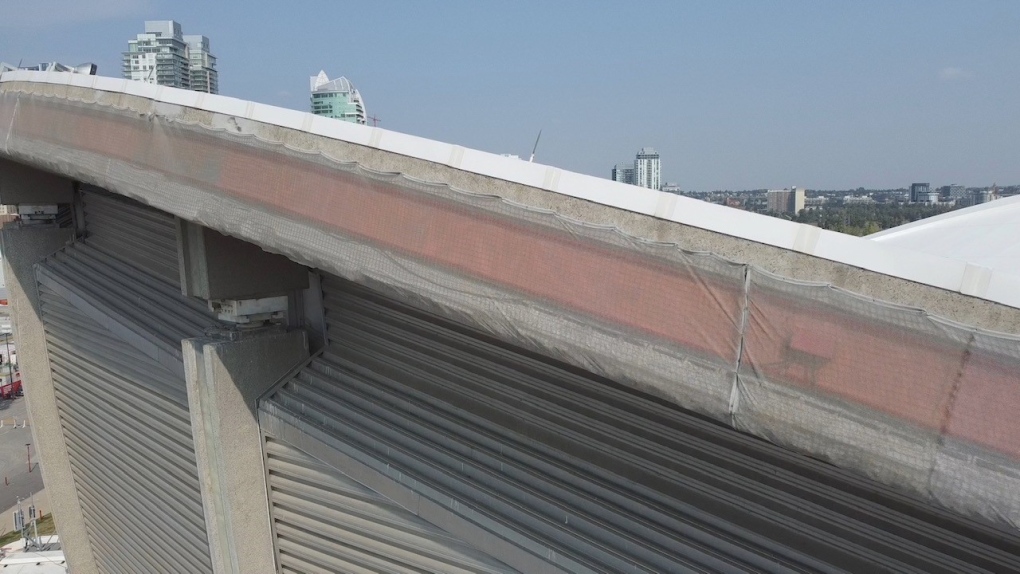 At 40 years old, the Scotiabank Saddledome in Calgary is showing its age.
A third party has been assembled to mediate negotiations between the city and the Calgary Sports and Entertainment Corporation (CSEC) regarding a new event centre.
A deal between the two sides to split the cost to build a $550-million arena ended on New Year's Eve due to rising costs.
After a deal was signed in 2019 to replace the four-decade-old Saddledome, costs ballooned to $634 million and the deal between the city and the Flames' ownership group fell apart.
Sharp says the city's committee attempting to make a new deal is making progress, though an update was delivered behind closed doors for hours on Wednesday morning.
"Progress means that we're still having some great conversations with CSEC and the city and we had a fulsome update from administration and the third party today, which was great," Sharp said.
"The city, through the third party, is talking to CSEC and we should all remain very optimistic that that's going to continue."
The last time the committee spoke with reporters on the state of negotiations was after a meeting in July, when city officials indicated there was reason for optimism on the potential for a deal.
Calgarians have not received any substantial updates on the progression of those discussions since the city announced it had recruited three people from the commercial real estate sector to revive or restructure a deal.
Wednesday's comments come as the Calgary Flames are gearing up for a season in which they are once again expected to contend for a Stanley Cup.
"You need to have a good product on the ice if you're going to ask the public for a quarter of a billion dollars at a minimum," said Moshe Lander, a senior lecturer in the department of economics at Concordia University.
The Flames' American Hockey League affiliate, the Wranglers, will join the NHL club in Calgary and play out of the Saddledome this upcoming season.
Lander says the longer this process gets dragged out; the more inflated the price will become.
"Materials are not going to get any cheaper, the workers that are going to be used in the construction of that arena are not going to get any cheaper, and the land value is not going to go down. It's not going to get cheaper. So with each passing year, that number goes up," he said.
"I don't think there's a way that the city is going to gain a lot by holding out. They've already had an arrangement where more or less they agreed to 50 per cent. It's hard to go back to the negotiating table now and say, 'Now we're only going to offer 40 per cent.' I think their share is only going to go up in dollar terms, which means that the ask on citizens and taxpayers is going to go up too."