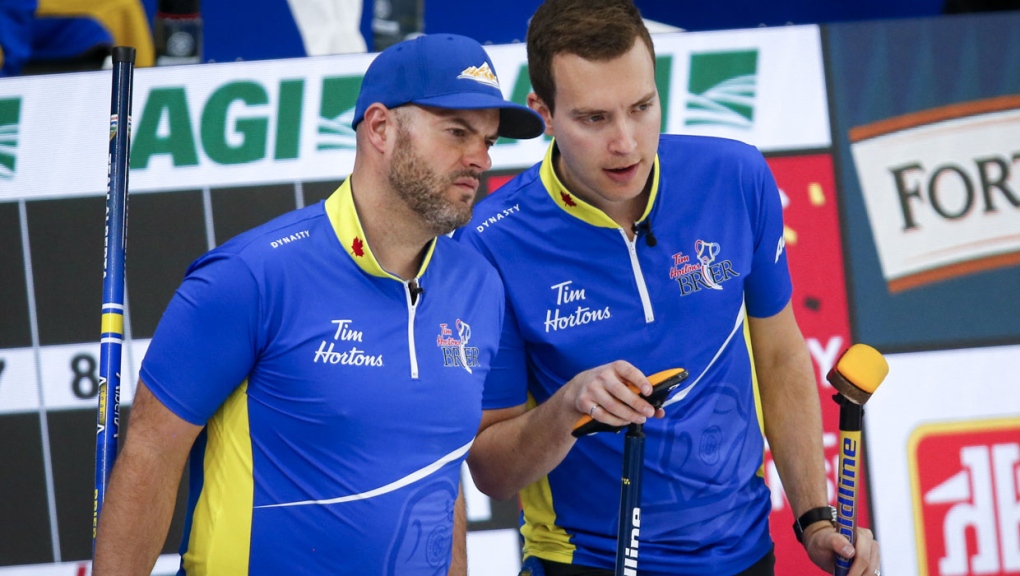 CALGARY -- A seemingly innocuous round-robin game was given such a profanity jolt during the recent Canadian men's curling championship that you could excuse unsuspecting viewers for spitting out their morning coffee in surprise.

A sport known for its soothing repetition, sportsmanship and athlete-next-door vibe can certainly bring the intensity when needed. Factor in hot microphones and the absence of tape delay and you have a recipe for salty language to occasionally make it on air.

The normally staid Tim Hortons Brier broadcast on TSN was rocked by a curler's F-bomb last month just as the traditional curling background music started after a commercial break. It wasn't clear what caused the frustration.

Another F-bomb was dropped this week in preliminary play at the Princess Auto's Players Championship. The profanity, with a description of poop thrown in for good measure, could be heard on the Sportsnet broadcast after a player's microphone pack became dislodged during some heavy sweeping.

Unlike most sports, curlers wear microphones on the ice during top-flight competitions. Sometimes the heat of battle can trump language control.

“There's a bit of a balance there to be struck,” Brier champion Brendan Bottcher said of his Alberta team's approach. “You have to have some self-awareness. You need to know anything you say could be picked up and especially this year (with no crowd noise), picked up a little more easily.”

Elite domestic curling returned in February when the Canadian women's championship kicked off a run of seven straight competitions in the spectator-free Calgary bubble. The final event on the calendar - the LGT world women's curling championship - begins April 30 at the Markin MacPhail Centre.

The second of two Grand Slams airs this week on Sportsnet while TSN has the domestic rights to the five other competitions. Neither network uses a delay, which is commonly used on occasions when players are mic'ed in other sports.

All protocols around language are “clearly stated to all curlers” who appear on TSN through the competitor's guide, the network said.

“Our production teams have not found the use of foul language in live curling broadcasts to be a significant issue,” a TSN spokesman said in an email.

The network first started using microphones on players in 1985. The Grand Slam series, meanwhile, has been active since the 2001-02 season.

Lead Dustin Kidby said he covers the small mic clipped to his uniform when he wants to swear, which drew a chuckle from teammate Matt Dunstone, who skipped the Saskatchewan side at the Brier.

“We've had our wrists slapped enough times, we've learned now,” Dunstone said as they appeared at a recent availability. “As frustrating as it gets, you've been in the situation so many times you find ways to keep it together.”

Players can be given small fines for unsportsmanlike conduct depending on the infraction. In most cases, curlers are given warnings for foul language.

Team Bottcher vice Darren Moulding, an ice technician and roofing business owner, said he has tried to change the way he talks both on and off the ice.

“It wasn't working to be one way and then try to be different when you're on camera,” Moulding said. “So I actually brought a swear jar in for my work.

“I was probably the guy who threw the most loonies in there.”

Despite curlers' best efforts, swear words do occasionally slip out in a competitive setting. Profanity is usually heard on at least a few occasions in most bonspiels.

Stewart Johnston, senior vice-president of sales and sports at Bell Media, said TSN has developed a “great partnership” with the players over the years.

“We talk to them all before the tournaments begin, we remind them, and now they're so used to it because they've been doing it for so long,” he said. “We want to get them as close to live as possible to bring that sense of action to our viewers.

“We truly have found that for the minimal risk it provides, we'd much rather be just full-up live.”

Moulding said when he feels the urge to swear during game action, he tries to keep it under his breath.

“It's almost not audible but it still does the job in terms of relieving some of the stress,” he said. “Because let's be honest, when you're mad and you give 'er a good F-bomb, you do feel better.

“So you've got to look for a little different release.”

Moulding added that all of his teammates try hard to keep the language in check.

“I think for the other guys it's a little more natural,” he said. “They're probably not as potty-mouthed as me. But we want to be a good example.

“I want a dad to be able to put his son in front of the tube to watch us play and know that we're not going to let him down. So that's what I think about, for sure.”

This report by The Canadian Press was first published April 22, 2021