CALGARY -- Mixing singing and signing, a Calgary man is creating an opera for both deaf and hearing audiences to enjoy.

Landon Krentz is developing Jesse: An ASL Opera a story about a child’s deaf life experience told through sign language opera, which  is a rhythmic combination presented by singer Heather Molly and Krentz himself as the signing actor.

“I thought what can I contribute to the arts landscape here in Canada, because there wasn’t an art landscape for deaf people,” said Krentz.

The deaf performer said he is fortunate to have the help of two of the world’s most prominent deaf artists Dawn Jani Birley and Marianne Aro, from Finland.

How, exactly, do deaf people perform and experience opera?

“For hearing people we listen through the sound,  (while) for deaf people we listen with our eyes,” said Birley animating the experience of sign language opera with her facial expressions and hands.

The Saskatchewan-born artist, from a third generation deaf family, has always been determined to chase her dreams despite facing multiple barriers.

“Being deaf is not a problem for me," she said. "(But) I guess it’s a problem for those out there in society. I wanted to become an actor but I was consistently told no.” 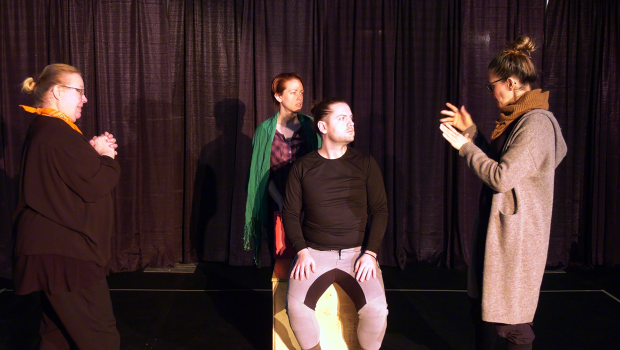 So she studied in Europe where she found many more opportunities to work as an actor.  It also brought her back to Canada for roles, including her award-winning portrayal of Horatio in the critically-acclaimed production of Prince Hamlet, presented by Why Not Theatre in Toronto.

Birley's work in intersectional theatre was one of Krentz’s inspirations.

“I wasn’t allowed to learn sign language when I was raised, so where was my exposure with language and culture,” he said.

He also grew up in Saskatchewan and hopes to eventually take his opera to a full stage performance.  At this point his team is workshopping the production but is inviting audiences to experience the work-in-progress being presented by Calgary’s Inside Out Theatre.

“For the deaf audience I think they could learn what’s possible with theatre. I hope it inspires them to become deaf artists as well,” said Krentz.

“For the hearing audience, I hope they learn something about deaf culture and our beautiful language.”

Demonstrations of the workshop take place Saturday, February 1 at 2 p.m. and 4 p.m. at Inside Out Theatre in Eau Claire Market.