The Siksika Nation has created its own prosecution office to enforce its own bylaws, as a major step toward self-governance.

The First Nation has hired Calgary area law firm Mincher Koeman LLP to establish what's believed to be the first office of its kind in the country.

The prosecutors will be dedicated to enforcing Siksika bylaws with a goal of eventually hearing matters at the provincial court located on reserve.

During the swearing-in ceremony on Friday, Siksika Chief Ouray Crowfoot says it's a big step toward autonomy.

He added, "We couldn't sit back and keep waiting for the government. We had to take steps in our own hands."

During the open mic portion of the event, some elders said the announcement would be historically significant for future generations, would help Siksika Nation members connect to their land, and called the moment an honour. 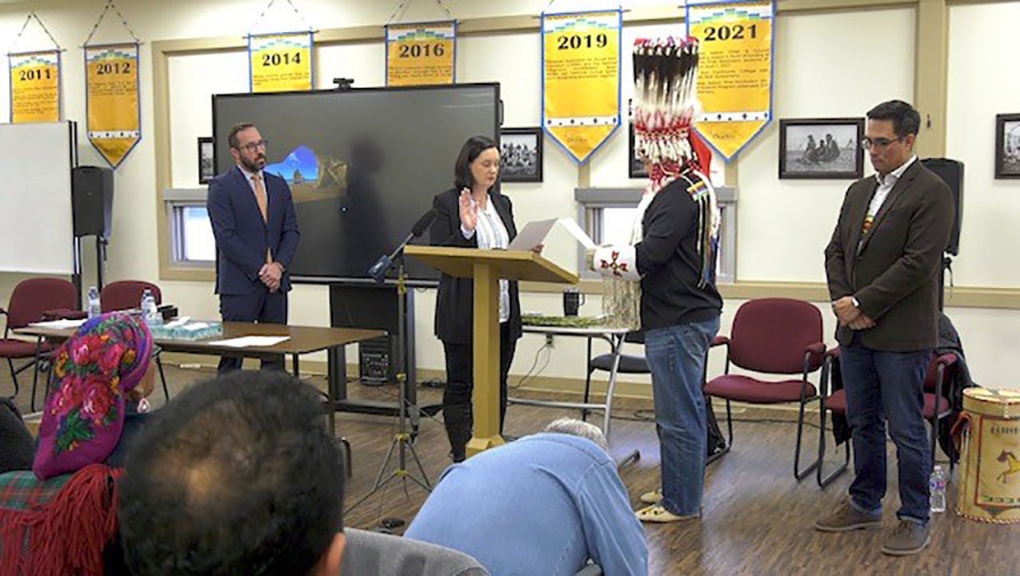 Councillor Samuel Crowfoot used to be a prosecutor and judge for First Nations court systems in Arizona and New Mexico.

He says an Indigenous-operated prosecutors' office hasn't been established in Canada -- until now.

"The fact that we have a prosecutor prosecuting Siksika Nation bylaws, beholden to the values and traditions of Siksika Nation and not necessarily the colonial Crown system is huge," said Crowfoot.

He later added, "We have the right people in place to create the system, so we'll be creating our own policies our own procedures we'll be working with the provincial court for a day to hear our cases in the docket," said Crowfoot.

Some bylaws that may be locally enforced include rules around trespassing, residency status, and protection for elders and vulnerable people.

Serious criminal matters will remain under federal jurisdiction and courts.

"It will enable Siksika and other nations to truly forge their own identity. To truly take a path toward reconciliation that should have been done a long time ago," said Lynsey Mincher, partner Mincher Koeman LLP.

She plans to travel to the First Nation on a weekly basis as part of creating the prosecution office on reserve.

Siksika nation was also awarded a $1.3 billion land settlement with the federal government in June.

Nation leadership has said those funds would allow it to hire more peace officers, establish the prosecutor's office and reintroduce its own police service, as steps towards self-governance and self-reliance.