CALGARY -- Dressed in a black bellaclava, with frost dripping off him, and gripping a piece of wood he calls his 'thunderstick', Steve McNeil looked a bit like a wrestling villain Friday night at Olympic Plaza's skating rink.

That wasn't because McNeil was a heel. In fact, he's just the opposite: a good guy.  It was just the reality of skating for over 19 and a half hours (19 hours, 26 minutes) outdoors, in a city where the windchill has exceeded -30 for more than 150 consecutive hours, and figures to continue until McNeil completes his skate some time Saturday.

While the wind chill Friday was around -38, McNeil said that wasn't the coldest he'd ever skated in.

"That's second," McNeil said, in an interview with CTV. "My record was last year, in Edmonton, on Family Day. I skated in -40."

McNeil skates as a tribute to his mom, who was born in 1926, and suffered from Alzheimer's.

He's skating in 12 different Canadian cities this year, up from eight in 2019, and said his goal the second time around with his 1926 Skate is simple.

"Each year, you want to raise more money for the city that you're in," he said.

What McNeil wasn't counting on when he launched 1926 Skate in 2019 was the degree to which he would also inspire others to want to do something.

"It's also about raising awareness," he said. "Because when you raise awareness, you also raise involvement." 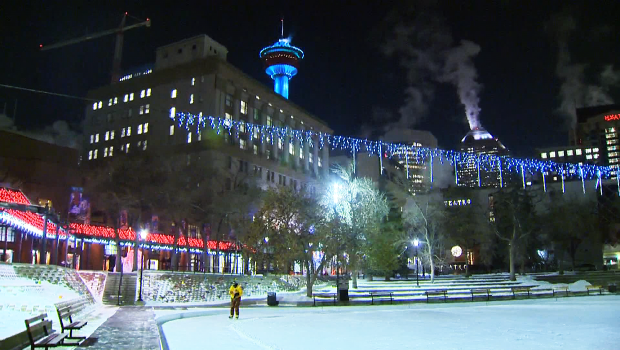 McNeil doesn't follow the money very closely -- his website has links directly to various Alzheimers societies who handle it, but guessed that he has raised about $67,000 so far for Alzheimer's awareness in all the cities he's skated in.

McNeil didn't have much company Friday night, and didn't really advocate that people should go out -- "Stay home!" he said -- but added if you happen to find yourself in the vicinity of Olympic Plaza, he'd love a double-double from Tim Horton's.

Anyone interested in donating to the campaign can find out more at 1926skate.com.