Snowy start to the week, warmer later on 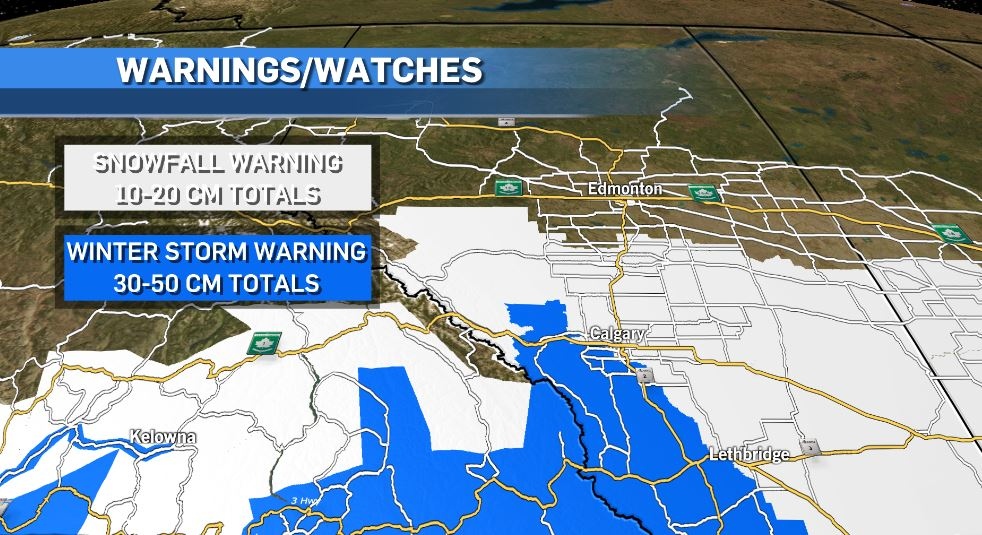 CALGARY -- The winter solstice has arrived and it’s bringing lots of snow to kick off astronomical winter. Snow spreads across southern Alberta on Monday afternoon and reaches central regions by Monday evening.

Light afternoon snow intensifies overnight before tapering off late Tuesday. Tuesday morning could be a tricky one for commuters as wind speeds pick up with northerly gusts of 50 or 60 km/h possible.

The snow, coupled with the gusty winds, will lead to blowing snow and hazardous road conditions. Most areas across southern and central Alberta should see 10-20 cm of snow. Calgary may see 20-25 cm by Tuesday evening, and even greater amounts, 30-50 cm, along the foothills.

An inverse temperature trend expected Tuesday where we reach the day’s high early in the morning as temperatures fall throughout the day. Wednesday morning starts in the minus double digits before rebounding quickly back to seasonal by the afternoon.

Christmas Eve could get a little warm, but unlikely warm enough to melt all the snow that fell earlier in the week. There’s a high chance of a white Christmas this year.

The winter solstice this year also marks a rare phenomenon called the ‘Great Conjunction’. Jupiter and Saturn will appear to be the closest they have been to one another in 400 years, and this year it will be visible in the evening as well – something that hasn’t happened in 800 years.

The close proximity to one another will cause the two planets to appear as one bright star at twilight along the southwest horizon. Unfortunately it won’t be visible for southern Alberta with the heavy clouds and snowfall in the forecast.

However, Tuesday evening should be clear enough to spot the two planets very close to one another, they just won’t be at their closest point. A conjunction between Jupiter and Saturn happen every 20 years, but the next ‘Great Conjunction’ takes place in March, 2080.

Cloudy, light snow tapers off late in the day

Periods of sun and cloud