Some react poorly on social media over Nenshi win 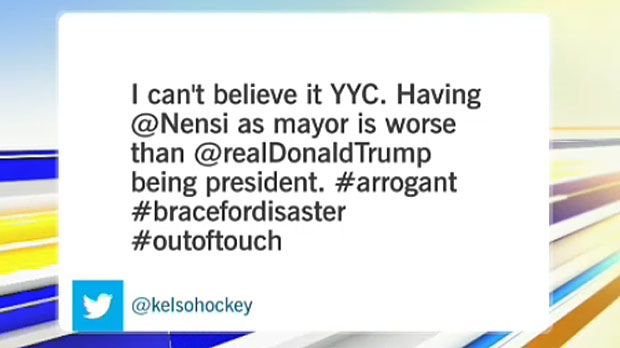 Sean Kelso, the director of communications for the Calgary Flames, commented about Nenshi's victory on Monday night.

While many on social media were overjoyed at the re-election of Naheed Nenshi as mayor of Calgary, some people were reacting a little less positively after hearing the news.

Sean Kelso, the director of communications for the Calgary Flames, wrote that Nenshi's victory was worse than the news that Trump was elected president of the United States.

The tweet was deleted soon after it was posted, but not before it was recorded by a number of people.

On Tuesday, mayor-elect Naheed Nenshi said the comment is likely because of the 'overly dramatic' relationship he's had with the Flames' organization, particularly over the status of the arena issue.

"I don't know this Mr. Kelso, I've never met him, I don't have any idea who he is. But, certainly he's not the only one. We've had another senior representative of the Flames insulting journalist who disagree with him, retweeting weird right-wing websites, insulting me personally. You know what? No grudge. People do that all the time. I didn't go into politics to be universally loved."

Mainstreet Research, the group that published a number of polls ahead of Election Day that put Bill Smith well ahead, also reacted to the results.

Through a tweet, president Quito Maggi offered his congratulations to the mayor and admitted that his organization was very wrong in their prediction of the race.

Mainstreet believed, through two separate polls, that Smith was going to win by a double-digit margin.