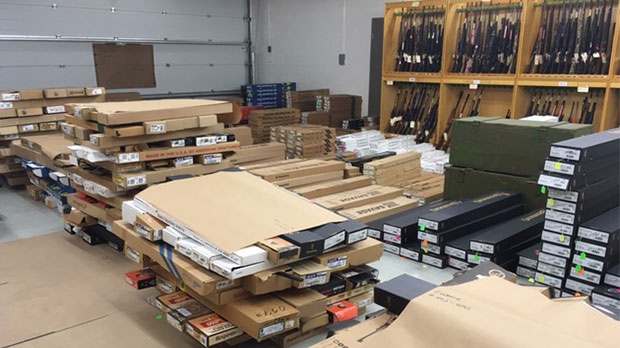 The entire inventory of K & D Implements Ltd. in Cardston was seized in 2007 due to the severity of the allegations against the gun store and the associated public safety risk.

LETHBRIDGE -- The owner of a Cardston hardware store will not have to serve jail time for selling guns and ammunition to people who didn’t provide a Possession and Acquisition Licence (PAL).

Dean Sommerfeldt, the owner and president of K & D Implements Ltd. has been handed a 13-month conditional sentence and fined $20,000 for violating the Firearms Act.

The 60-year-old pleaded guilty in September to three counts of transferring weapons or ammunition without authority and one count of contravening the Firearms Act related to the storage, handling and display of firearms. Gun buyers in Canada must have a valid PAL before firearms and ammunition can be purchased.

Sommerfeldt and his 33-year-old son Todd were charged in 2017 following a five-month investigation by RCMP and the Alberta Law Enforcement Response Teams (ALERT).

In May 2017, police seized the store’s entire firearms inventory including more than 1,000 guns, a million rounds of ammunition, thousands of firearm primers, gunpowder and other material used in making bullets.

"The only area the accused falls short is in the sale of firearms," Ainscough said.

A second undercover officer purchased a rifle with a PAL made out to a different name. He told Sommerfeldt it was his friends PAL and the sale was completed.

Officers also noted there were firearms displayed that were not locked and had chains dangling from the trigger guards, within easy access of store customers. They also noted handguns without trigger locks were being kept in an unlocked display case.

The Crown called for a one-year jail term, followed by several conditions, maintaining anything less than actual custody would fail to dissuade other dealers from doing the same thing.

The court received 220 letters of reference, speaking to Somerfield’s community service and exemplary behaviour, emphasizing his tenure as a local scout leader and the fact he headed an organization that supports parents raising children with disabilities.

In handing down his sentence, Justice D.K. Miller told the court Sommerfeldt "outright broke the law," adding the offences could have had catastrophic consequences if the guns and ammunition sold to the undercover officers had gotten into the wrong hands.

As part of his conditional sentence order, Sommerfeldt must abide by a 10 p.m. to 7 a.m. curfew, and may only leave his home for approved health or dental appointments, shopping, religious services or community service work that he had been taking part in prior to his sentence. He is not allowed to leave the province or visit his recreational property.

Sommerfeldt is also prohibited from owning any firearms for five years, and must forfeit any goods seized by police during their investigation including the items sold to the undercover officers.

The vast majority of the guns, ammunition and other material seized have since been returned to the accused through a third party and are slated to be sold by consignment at a Lethbridge gun store.

Sommerfeldt declined to comment on the ruling. His lawyer, Frank Llewellyn, said he feels the ends of justice have been met.

"We’re quite happy the matter has been resolved. This family has undergone a terrible ordeal and they are glad it’s at an end," he said.