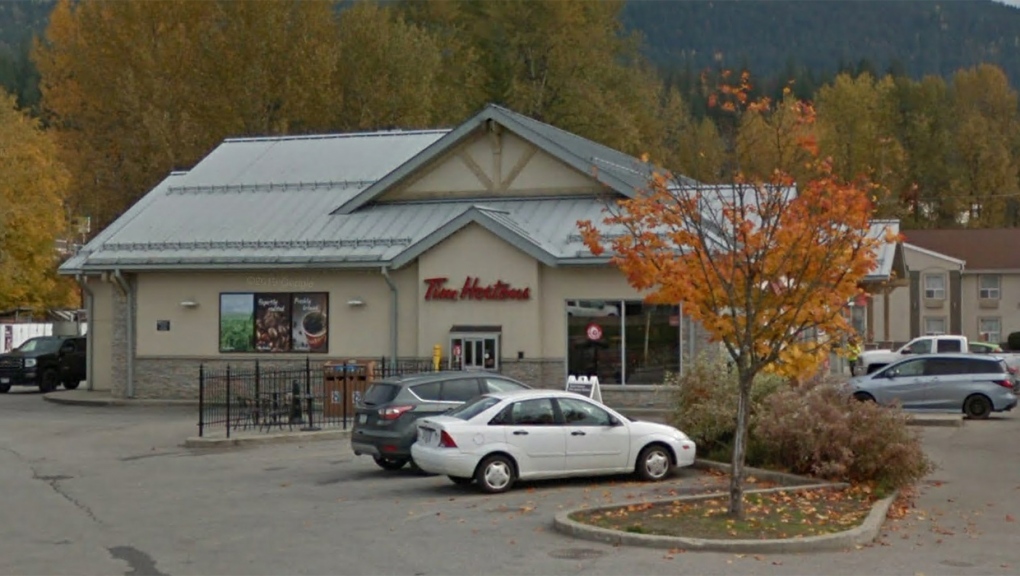 A 43-year-old Lethbridge, Alta. woman faces charges after allegedly refusing to wear a mask at the Tim Hortons in Revelstoke, B.C. (Google Maps)

CALGARY -- A 43-year-old Lethbridge, Alta. woman has received the first face covering ticket issued by the Revelstoke RCMP after she allegedly refused to wear a mask at a Tim Hortons in the B.C. town.

Sgt. Chris Dodds says officers responded to the store on the morning of Dec. 6, just before 5:30 a.m., after staff notified police of a maskless customer who refused to leave.

The woman, who was alone, was still in the Tim Hortons when RCMP members arrived and, according to Dodds, refused to comply when officers asked her to leave. She was arrested for causing a disturbance in a public place, escorted outside, ticketed and released.

The accused, whose name has not been released, faces two $230 violation tickets under B.C.'s COVID-19 Related Measures Act for failing to wear a face covering in indoor public space and abusive/belligerent behaviour.

Dodds says the face covering ticket is the first issued in Revelstoke since the order went into effect on Nov. 13. Officers have responded to approximately 10 mask-related or social distancing calls to local businesses or reports of gatherings since the order was implemented but they were all resolved through education and did not warrant tickets.

The Lethbridge woman is scheduled to appear in Revelstoke provincial court on Feb. 3, 2021. RCMP believe the woman has been staying in the area and was not travelling through town at the time of the incident.