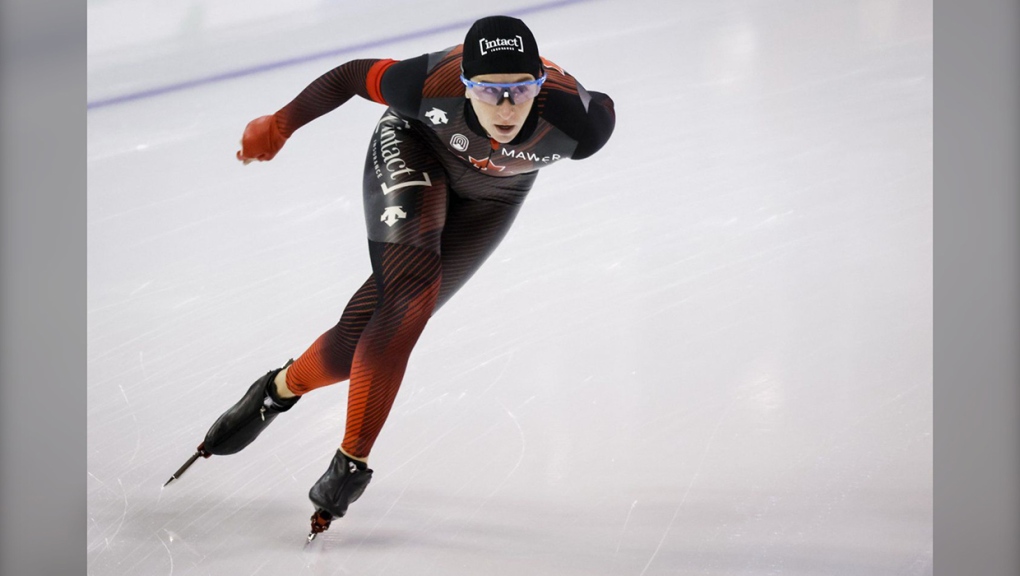 The 32-year-old speedskater from Ottawa will compete in six races in three days by the time the World Cup concludes Sunday in Calgary.

Blondin was a third of Canada's women's pursuit team that won Olympic gold in February. She claimed individual silver in the women's mass start and also raced the 3,000 and 1,500 in Beijing.

In a sport where skaters often specialize in sprints, middle distance or endurance, an all-rounder is rare.

"It keeps me motivated," Blondin said. "I think I've proven I can do it."

Blondin placed fourth in the women's 3,000 metres Friday at the Olympic Oval.

She'll compete in the 1,500 before joining Ottawa's Isabelle Weidemann and Valérie Maltais of La Baie, Que., in team pursuit Saturday.

"One of my goals this year is to get on the podium for the 1,500," Blondin said. "I know my speed right now is really high and so I think I need this weekend to utilize that and to try to execute.

"I'm hoping I can pull something out that's going to be fast enough for the podium."

On Sunday, Blondin races her signature mass start comprised of both a semifinal and final, as well as the 1,000 metres.

Proper warming down and nutrition, plus walking her dog Brooke morning and night, are how she manages a jam-packed race schedule physically and mentally.

"I feel like I have a little less pressure on my shoulders now that I've come home with two medals at the Games," Blondin said. "I may be nearing the tail end of my career. I don't know. I'm taking it year by year at this point. I'm still performing decently well and just enjoying it."

Connor Howe of Canmore, Alta., Montreal's Antoine Gélinas-Beaulieu and Toronto's Hayden Mayeur finished second just over half a second behind the United States on Friday. Norway was third.

Antoine Gélinas-Beaulieu, Connor Howe and Hayden Mayeur led Canada to silver in the Team Pursuit at the ISU World Cup in Calgary, crossing the finish line just 0.04 seconds off the national record.

The Canadian trio collected the first medal of the season in the event. Howe and long-distance specialists Jordan Belchos and Ted-Jan Bloemen were fifth in Beijing.

"It gives us lots of encouragement," Howe said. "This year we're trying out new things a bit, a new team with middle-distance guys to get to speed easier. If you can't start fast enough, you can't make up the time.

"It seems to be working. If we think that's good we'll work on that towards the next Olympics and be better contenders."

Howe leads the World Cup season standings in the men's 1,500 metres. After winning and finishing second in his first two races of the season, he was sixth Friday.

The 22-year-old said he lost speed late in the race and also got hung up with Norway's Peder Kongshaug changing lanes on the last lap.

Wesly Dijs of the Netherlands took the men's 1,500 metres ahead of runner-up Zhongyan Ning of China and countryman Kjeld Nuis in third.

Norway's Ragne Wiklund was first in the 3k with Dutchwomen Marijke Groenewoud and Antoinette Rijpma — de Jong second and third respectively ahead of Blondin.

Reigning Olympic gold medallist Irene Schouten of the Netherlands and bronze medallist Weidemann both struggled to seventh and 11th, respectively, in the final pairing.

Blondin shook off the "what now?" post-Olympic blues she felt after Beijing to find new purpose in training and racing.

She trained with the men earlier in her career and has returned to that group after concentrating for four years on women's team pursuit.

"I started training with the boys again which I think was a good change," Blondin said. "I communicate more like a guy. In the past, when I trained in that environment, the kind of edge that gave me, it's more my mindset with the boys and I've really enjoyed working with them."

Canada's financial intelligence agency is stepping up the fight against the illicit wildlife trade by taking aim at the criminals who reap big profits from the global racket.

A suicide bombing that struck inside a mosque at a police and government compound in northwest Pakistan reflects 'security lapses,' current and former officials said as the death toll from the devastating blast climbed to 100 on Tuesday.

Police departments in the Maritimes say there are issues with 911 emergency calling Tuesday morning.