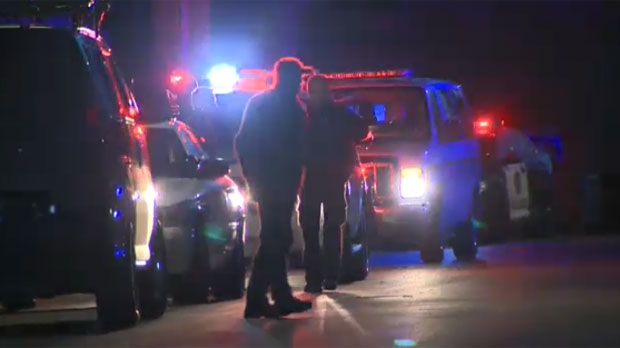 A young child and a woman were transported to hospital Friday night for treatment of stab wounds following an attack in a northwest neighbourhood that police consider to be random and not targeted.

According to the Calgary Police Service, officers including members of the TAC team were called to a park in the vicinity of Bearberry Crescent and Berwick Drive Northwest at around 7:00 p.m. following reports of a stabbing.

“We found a female and a young child in medical distress both of whom were transported immediately to the hospital in serious but stable condition," said CPS Staff Sergeant Asif Rashid.

The injured child, believed to be approximately six years old, was suffering from stab wounds and transported by ambulance to the Alberta Children’s Hospital. The injured woman was taken to the Foothills Medical Centre for treatment of stab wounds.

Witnesses tell CTV the boy had been stabbed in the back while the woman was suffering from an injury to her chest. An off-duty nurse attended to the stabbing victims prior to the arrival of EMS.

An unidentified male was located and apprehended by police. “As police converged on the scene, there was additional intelligence that came forth from neighbours and witnesses suggesting that an individual nearby might be responsible for the matter,” said Rashid. “A male was taken into custody without incident.”

According to CPS, the suspect did not resist arrest. A suspect weapon had not been located as of 9:30 p.m. as members of the forensics crime scene unit continued to scour the area for evidence.

“Preliminary indications are that the individual taken into custody is not known to the female and the child, however, the fruits of the investigation will bear out those details,” said Rashid. “There is no information to suggest that this was a targeted attack.”

“There (are) no immediate public safety concerns."

Police have confirmed the victims are mother and son. A preliminary police investigation into the incident suggests the attack was random.