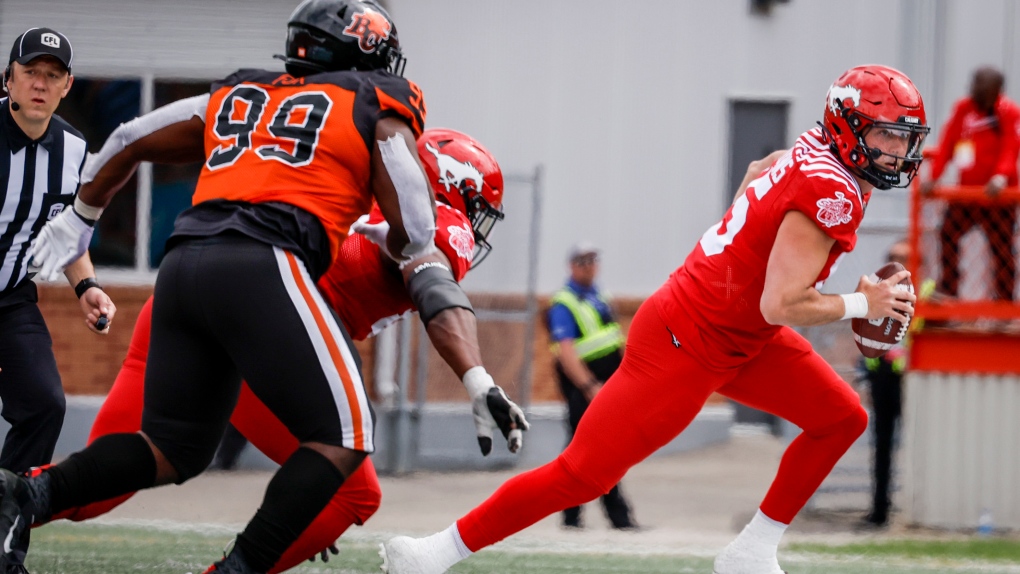 A spark on special teams gave the Calgary Stampeders the momentum they needed to beat the B.C. Lions 41-6 on Saturday.

Shawn Bane Jr. ran a punt back 74 yards for a touchdown late in the second quarter on Sunday at McMahon Stadium to give the Stamps a 13-0 lead in the first pre-season game for both Canadian Football League squads.

“I played my part in the first half and I was able to end up in the end zone, so that's always a fantastic day,” said Bane, who broke an early tackle before receiving a great block from Tre Odoms-Dukes that helped him run in for the score untouched. “Shout out to him. Thank God he knocked him on the ground because I didn't want to cut back. I definitely gave him his props.”

Dedrick Mills, Tommy Stevens and Rasheed Tucker went on to score rushing TDs in the second half, while Josiah Schakel had an interception return for a score late in the contest as the Stamps cruised to a convincing win.

“We needed a spark and we got one on special teams,” said Calgary coach Dave Dickenson, who wasn't overly impressed with his team's start to the afternoon affair. “That was the play that kind of set us up for the rest of the game.”

After entering the game late in the third quarter as Calgary's third quarterback, Stevens made the most of his opportunity by completing his lone pass for four yards before scoring his rushing TD.

Calgary kicker Keiran Burham finished with a pair of field goals and made all five of his converts.

Starting Lions quarterback Michael O'Connor went 17 for 23 for 151 yards and tossed a touchdown pass to Jamarius Way for B.C.'s lone points of the game.

Rookie B.C. kicker Mark Milan had a rough afternoon as he missed a pair of field goals and a convert.

“We chose to play a lot of first year CFL guys,” said B.C. coach Rick Campbell. “Regardless of what the score is, there's some guys that did good things and that was our No. 1 goal coming here was to make sure we evaluate and not miss out on good players. We're going to make sure we do a good job watching the film and see how it looks.”

While the Stamps dressed almost their entire training camp roster, Campbell brought just 50 of his players while the rest stayed behind in B.C.

“It's two totally different rosters,” he said. “They're dressing everyone because it's a home game for them and that's fine.

“We left a bunch of people back in Kamloops (training camp). They've been practising and we're going to practise (Sunday). That just all factored into our decision.”

Dickenson agreed with his B.C. counterpart that the Stamps had a distinct advantage during the pre-season tilt.

“We had 90 guys,” he said. “They had 50. I think they ran out of gas and obviously a lot of their starter type of guys didn't even play at all.”

Neither team could get anything going offensively in the first quarter with its starting quarterbacks in the game.

Bo Levi Mitchell got the start under centre for Calgary and completed just three of 10 passes for 37 yards. Although he guided the Stamps into scoring territory twice, both drives ended when he was picked off - first by Tyniel Cooper at the five-yard line and then by Quincey Mauger in the end zone.

“I'll definitely eat those,” Mitchell said. “Things can be cleaned up - obviously, I can take care of the ball and make sure it's not in harm's way at all.”

O'Connor didn't have much success in the opening quarter either as he was unable to convert on a pair of third-down conversions that resulted in a pair of turnovers for the Lions.

In at QB for Calgary in the second quarter, Jake Maier completed seven of 13 passes for 90 yards, but he did get the home team into scoring position multiple times and Burnham kicked a pair of field goals from 33 and 34 yards to give the Stamps a 6-0 lead.

The Lions capitalized on a turnover early in the third quarter to get on the scoreboard. After Mauger forced punt returner Peyton Logan to fumble the ball, Victor Gamboa picked it up at Calgary's 39-yard line.

O'Connor then threw a 39-yard strike to Way in the end zone. Milan's struggles continued as he missed the extra point.

Maier then engineered a seven-play, 65-yard drive that was capped off by a three-yard TD run by Mills to put the Stamps up 20-6.

The Stamps extended that lead early in the fourth quarter as Stevens ran for a two-yard score before Schakel ran an interception back for a 20-yard TD.

B.C.'s second-string quarterback Kevin Thomson was injured on the latter play when he was hit hard by Calgary's Titus Wall while releasing the ball. Thomson, who had to be helped off the field, went nine for 20 for 129 yards before his day ended early.

Chase Fourcade entered the game in the fourth quarter as Calgary's fourth QB of the game. He guided the Stamps on a late scoring drive of six plays and 35 yards that was capped off by a five-yard rushing TD by Tucker. Fourcade completed two of four passes for 17 yards.

This report by The Canadian Press was first published May 28, 2022