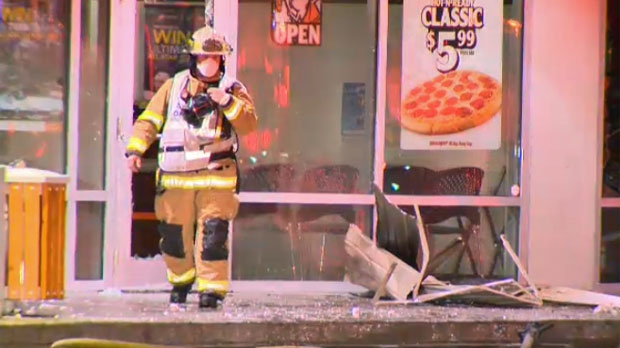 A northeast business suffered significant damage during a Sunday morning fire but the efforts of the Calgary Fire Department prevented the blaze from spreading to neighbouring businesses.

“Just after 3:00 a.m. this morning, the fire department got a call to report a fire in a strip mall in the 7100 block of 80 Avenue Northeast,” said Bruce Gelhorn, Calgary Fire Department District Chief. “Small flames were visible, at the time that they arrived.”

“Once they did a 360 and kind of walked around the building to investigate, they called a second alarm realizing they needed more resources here.”

Gelhorn says there were few people in the area when the fire broke out and all occupants self-evacuated from the strip mall’s units prior to the arrival of fire crews.

Aerial ladder trucks were deployed to the scene and high capacity fans were utilized to pressurize units in the strip mall near the fire. Gelhorn says the fire was contained to a single business, believed to be a clothing store, at the end of the strip mall and the blaze was extinguished.

“The investigator is on scene and we’re looking at what may have caused it at this time but no determination at this point.”