It's been a disconnected Friday for millions of Canadians thanks to a lack of service from one of the country's telecommunications giants.

Rogers and its sub-brand Fido have been without any connectivity after a major service outage hit around 2:40 a.m. MT.

It's an outage that has been frustrating so many on a busy Calgary morning.

Electronic payments aren't working for thousands of merchants -- including many at the Calgary Stampede -- which is hurting business and turning Interac and ATM customers away.

Jordan Andrychuk has been followed around by the service black hole since waking up.

"The gas station wouldn't take my debit," he told CTV News, "so (my girlfriend and I) were running around to different gas stations trying to figure out where we can get gas."

That left him late for his shift. And since he's the lead baker at Canela Bakery and Cafe in Inglewood, he knew that wouldn't work.

"So we decided to get out of the car and run a few blocks all the way to our house, where we keep this jar full of all our loose change," Andyrchuk said. "We just dumped it out on the ground and started counting it all hoping we had enough to get us both to work."

But his boss didn't mind the tardiness. That's because Canela president Veronica Amaya was already well versed in the issue.

"Our customers wanted to try (to pay) with a debit card, and it wasn't working," she said. "It's been stressful having to see."

Conservative MP Michelle Rempel Garner is calling for an emergency parliamentary committee meeting on the outage "to understand how this happened and to make sure it doesn’t happen again."

"Given the critical infrastructure that’s affected, and that the CRTC itself is affected, the cause of the Rogers outage should be immediately explained," she tweeted.

Rempel Garner says she believes the economic impact could be lessened by certain political actions.

"Telecommunications in Canada is highly regulated by the federal government. Many in my community have expressed concerns over the years related to the high costs of cell phone and wireless services due to limited competition enforced by Canada’s current regulatory structure. Today’s outage underscores potential additional risks of Canada’s current approach to regulations." 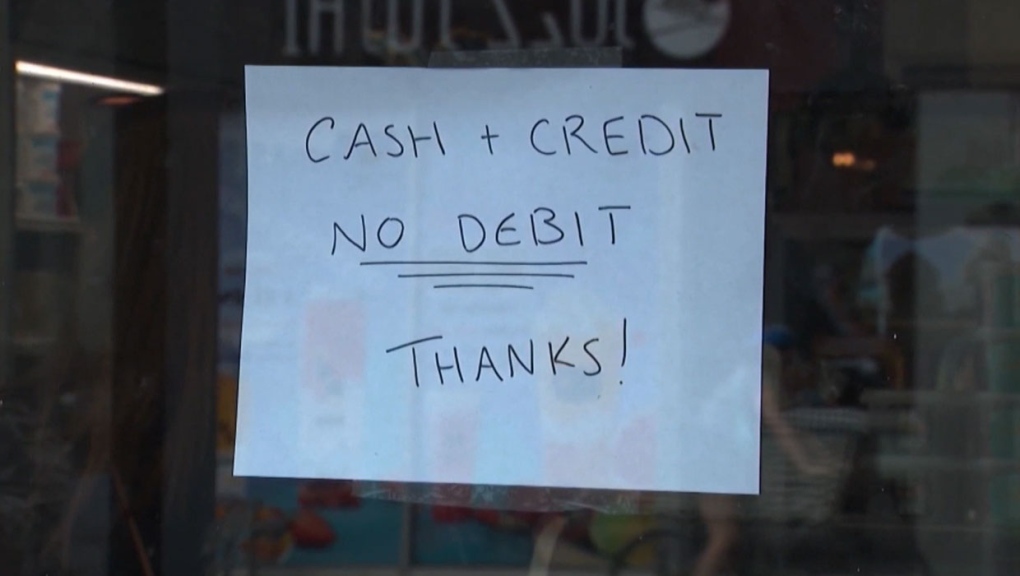 The outage is affecting Canadians from every walk of life.

Both Service Canada and the Canada Revenue Agency reported outages to their telephone lines.

Service Canada said in a tweet that some call centres are experiencing network issues. That includes passport offices, which have been overwhelmed for weeks because of passport issuing and renewal backlogs across the country.

The Rogers outage has made those problems more dramatic.

Elsewhere, the Canada Border Services Agency (CBSA) said some travellers have had issues submitting their travel documents through the ArriveCAN app. Travellers are being advised to provide paper copies of their proof of vaccination and travel details via the traveller contact information form.

While the reason behind the outage is still unknown, the telecommunications company apologized for the network interruptions and assured further updates will be provided soon.

There are currently no timelines as to when bars could reappear.

"It underscores just how dependent we are on internet-based connectivity," tech expert Carmi Levy said. "When that network goes away, so does everything else, and you can't do anything. There is no plan B."

It's not the first time Rogers has had problems.

"The last time this happened, in April 2021, it was a software update that cascaded out of control, and before you knew it, the entire country was affected," Levy said.

The patch last year was quicker, but Levy says the Rogers system took entire days before it was fully operational.