'Such a feel-good thing': 4 ducklings rescued from Calgary storm drain 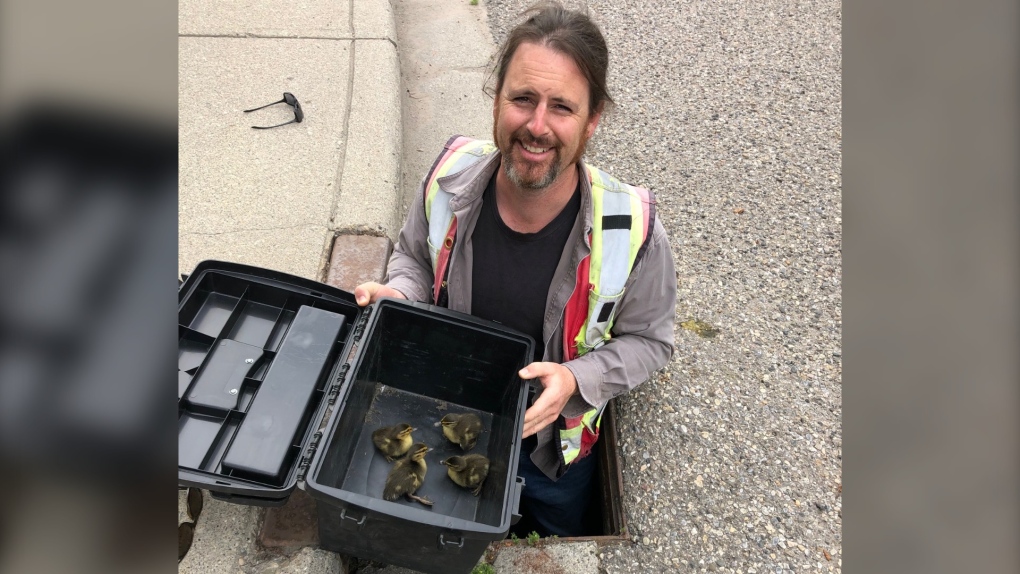 CALGARY -- Four ducklings were reunited with their mother Tuesday morning thanks to the quick action of a Calgary couple.

Melanie Knutson was out for her regular walk around the neighbourhood of Canyon Meadows when she spotted a mother duck and a group of ducklings near the intersection of Canterbury Drive and 124th Ave. S.W..

"There was a woman trying to get a picture with her dog and the dog was freaking out," she said.

"Then on my second lap, I do the same route three times, I heard some chirping and I went over to the (storm drain) and I looked down and I saw one (duckling)."

Knutson raced home to call 311 and found her partner, Gregory Robottom, was also there, having returned home after forgotting some tools for work.

"I said 'We have to get this duckling out, I know where the mother is,' so we ran back and he lifted the grate off and there was four," she said.

Using an equipment case as a carrier, the pair managed to corral three of the ducklings, but the fourth scooted further into a pipe.

"So he hovered the case in the hole so it could hear its siblings, then it finally poked out and he got it," said Knutson.

That's when the search began for the mother hen.

"We went walking down an alley to where I thought she was but she wasn't there," said Knutson.

"Then an older couple that live around the corner said 'she went that way,' and further down the alley was mom with four (ducklings)."

Robottom walked as close as he could without disturbing the mother duck, then tilted the case so the rescued ducklings could get out.

"We were about (four to five metres) away and they went out and went 'chirp, chirp, chirp' and the momma perked up and came walking toward them with the other four then they all kind of huddled together then waddled away into another back yard.

"It was such a feel-good thing."