'Surprised that no one died': Truck crashes into Calgary restaurant

'Surprised that no one died': Truck crashes into Calgary restaurant

Several people were hurt, but Calgary police say an incident where a truck drove through a restaurant window will not lead to charges being laid.

Emergency crews were called to the area of 31 Street and 34 Avenue S.E. at approximately 10:15 p.m. for reports of a crash.

On arrival, they found a truck had driven through the front window of Sammy's Chophouse and landed fully inside the business.

Courtney Daly was sitting inside when the truck smashed into the restaurant.

"I looked up and saw a black truck flying towards the window. I told my friends to 'look out' and then it was on top us – it came through the window."

She calls it "the most terrifying experience" she has ever had in her life.

Daly adds the pub was busy at the time the crash occurred.

"I'm surprised that no one died." 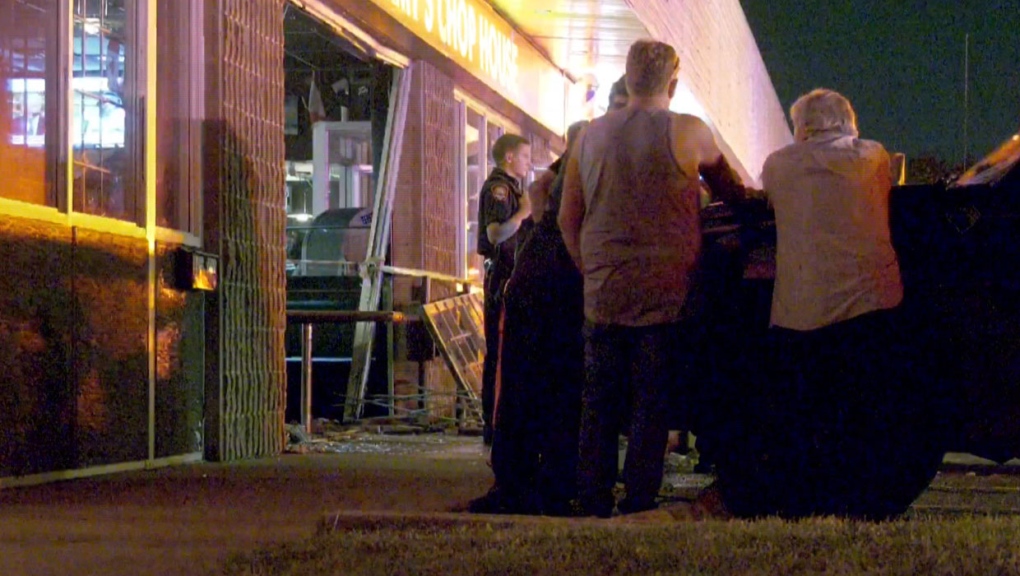 "I just heard smashing glass and then I couldn't breathe," said Catherine Dawson, who says she was the first person hit.

"I was on my hands and knees crawling – I guess I was crawling from underneath the vehicle and I could not breathe.

EMS told CTV News that four people were taken to hospital in connection with the incident and several people were assessed at the scene.

The incident could have been much worse, officials said on Sunday.

"Anytime a vehicle enters a building and actually breached the structure of a building, we have the potential for a number of serious injuries and so, we work with our allied agencies like the Calgary Fire Department to make sure that the building is safe and secure before we can even enter that building," said Helene Hamilton, acting public education officer with EMS.

Calgary police say the driver of the truck, a 76-year-old man, had crashed into the restaurant at "a high rate of speed."

Alcohol is not believed to have been a factor in the collision, police say.

The matter is under investigation but it's not believed the incident is criminal in nature.

"Anyone with information, or who has dashcam footage from the area, is asked to contact police by calling 403-266-1234."