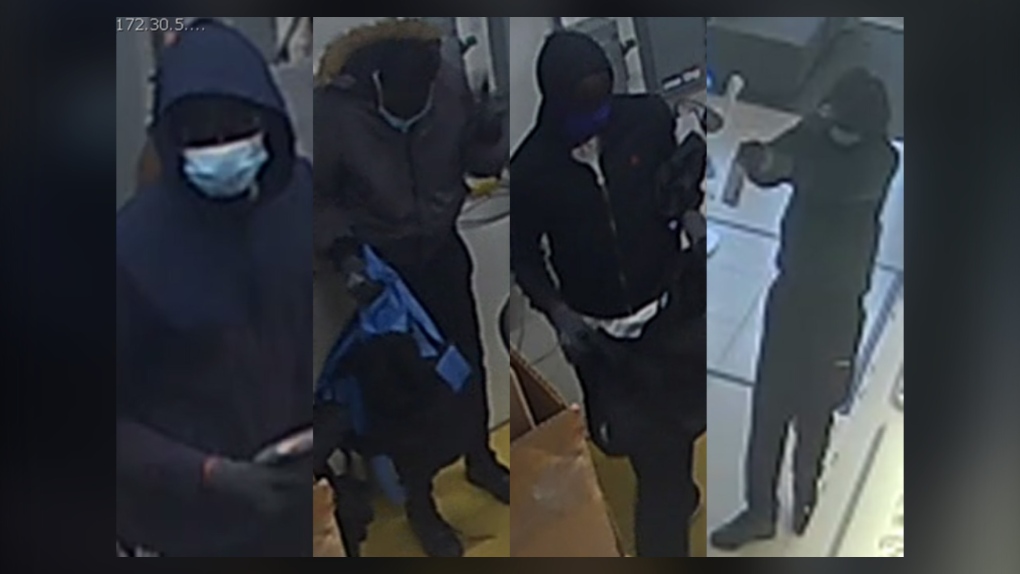 Surveillance images of the suspects in an Aug. 10 robbery at the Telus store in Beacon Hill (CPS)

CALGARY -- Members of the Calgary Police Service are attempting to identify a group of young men in connection with a Monday afternoon robbery at a Telus store in Beacon Hill where bear spray was discharged.

According to police, the suspects entered the store in the 11700 block of Sarcee Trail N.W. at around 2 p.m. where several customers and employees were present.

A woman who had been in the store to purchase a new cell phone tells CTV News that the men, believed to be between 18 and 20 years old, began to scream and shove the five customers and four staff members toward the back of the store. The suspects discharged bear spray and demanded that the manager hand over multiple cell phones being housed in a safe. She says the manager was sprayed directly in the face.

The thieves did not rob the customers and focused their efforts solely on the phones.

The customer says the suspects became agitated and started to panic when they were unsuccessful in their attempt to leave the locked store. Store staff then intervened and the group left.

Police say three of the suspects fled the store through the front entrance while the fourth left through a back door. It's believed the group drove off in a beige or light green SUV of unknown make and model.

According to the customer, staff from a neighbouring business came with water to help the victims of the pepper spray.

Police say the suspects are described as being:

At the time of the robbery, the suspects were all wearing black hoodies, jeans, sunglasses, gloves and face masks.

Anyone who witnessed the robbery, recorded the getaway or has information regarding the offenders is asked to contact the Calgary Police Service at 403-266-1234 or anonymous tips may be submitted to Crime Stoppers.