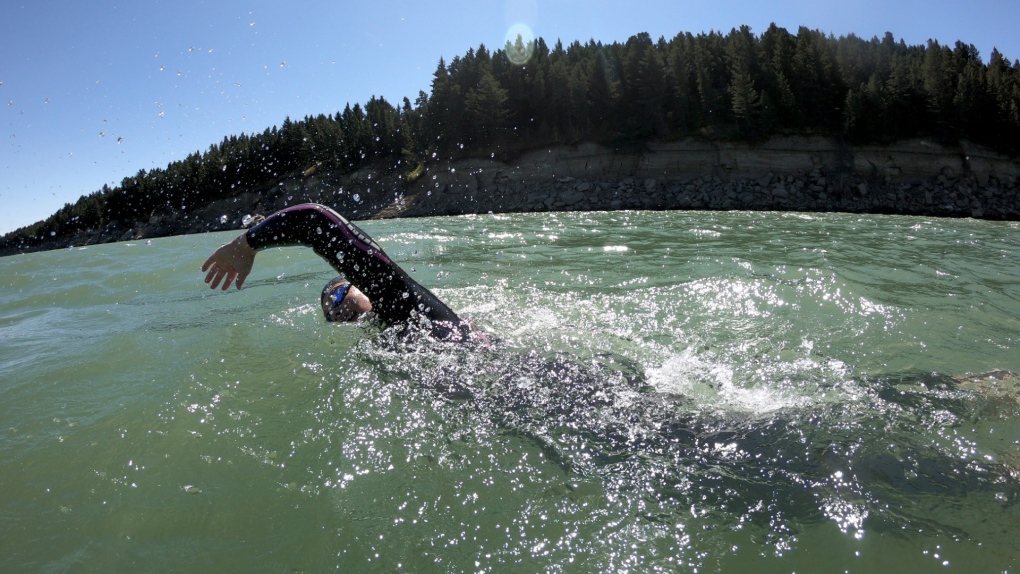 Nicole Robinson swam across the Oldman Reservoir to bring awareness to environmental issues around water in the area. (Courtesy Ragnar Robinson)

LETHBRIDGE -- A Lethbridge woman suited up on Saturday to bring attention to changes to the province's coal policy and what she calls the potentially serious impacts it could have on wildlife and drinking water in the Oldman River.

Concerned resident Nicole Robinson decided to swim across the Oldman Reservoir to raise awareness on the matter.

She says changes to Alberta’s coal policy and the decision to remove environmental protections that had been in place since 1976 just aren’t worth the risks, and since Lethbridge gets its drinking water from the Oldman River watershed, she wants locals to know how that would be affected.

“The goal is just to get people that are maybe a bit further away, that might not realize what’s gone on and just raise awareness for them so that if it something that concerns them, they can get on the phone, email their MLAs, that kind of thing," she said.

The previously protected area east of the Crowsnest Pass is now slated for open pit mining.

Robinson, who has a degree in environmental science, said she realizes that times are difficult right now and people need jobs, but said the policy change is short sighted.

“You need to consult your people and make sure that’s something they're okay with before you’re going ahead and doing that and you know let’s just think long-term not short-term for the next 20 years," she said.

"These changes are going to have lasting impacts for 50 to 100 years down the road.”

Robinson says she’s been a competitive swimmer her whole life and that’s why instead of wading around for change to happen she took to the waters to show how beneficial it is to have a clean reservoir.

“Normally I’d be in the pool but lately I’ve been testing out some open water stuff," she said.

"This is what we’re trying to protect and so the fact that I could swim in it, proving to people it’s clean enough right now for us to drink in it, fish in it, swim in it and let’s keep it that way.”

Robinson said she expected the swim to take her roughly six to seven hours to complete, starting at 9:30 a.m.

But to her surprise it only took her around four-and-a-half hours to finish the 15 kilometres.  She said she didn’t think many people would be there to greet her back on land but to her delight there was.

“It makes it go by a little easier when you know there’s people waiting for you and cheering you on," she said.

Robinson said she set a new personal record, previously swimming eight to nine kilometres straight. She hopes people, no matter their age range, feel like they can be part of invoking change even if it’s simply by writing to their local MLA.