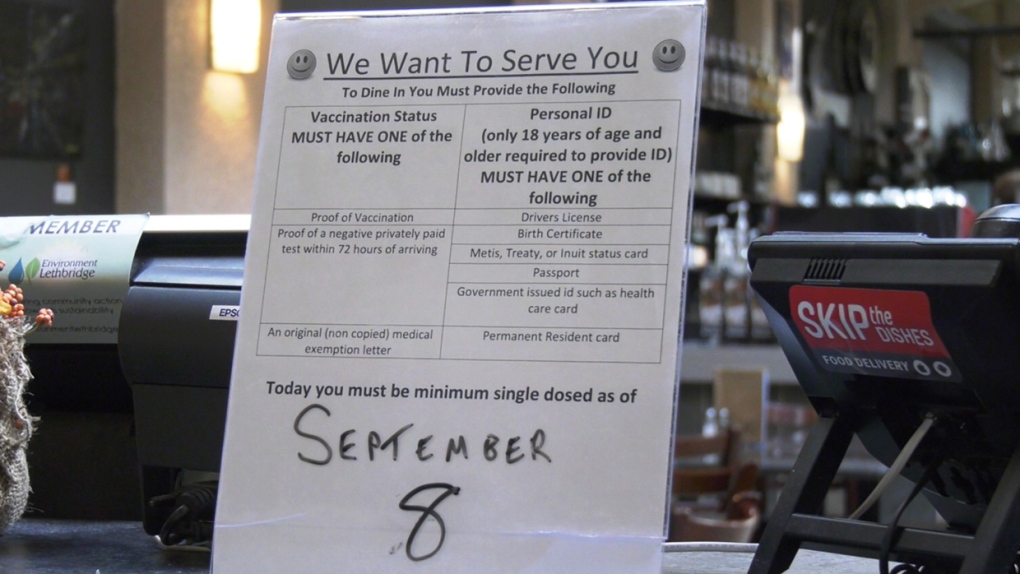 A sign in in a southern Alberta establishment advises customers of the entry requirements. (file)
CALGARY -

Two tea houses in one southern Alberta community have become an example of the uncertainty caused by the government allowing businesses to make up their own minds about what is essentially a vaccine passport.

Restaurants, bars and pubs have been debating whether they will require a vaccination record before patrons are allowed to enter or if they will limit them to patios and takeout.

Last week, Premier Jason Kenney brought in a “restrictions exemption program” that allows owners to operate with almost no COVID-19 rules as long as they ask for proof of vaccination. Those that choose not to must abide by stricter public health rules.

The United Conservative government has been criticized for downloading the decision. Critics say it causes confusion and forces compliant businesses to face the wrath of anti-vaccination customers.

Tracey Worsley and her daughter, Rebecca, opened The British Teahouse just eight weeks ago. They've decided to close their doors to indoor dining.

"We believe everybody has a choice and it's not right that businesses should have to make that choice," Worsley said in a phone interview.

"The government should make the decision like they did last time."

The Noble Teahouse has been open a year after extensive redecorating of the 113-year-old home.

Operations manager Joelene Smart said it was a hard decision to require the passport but there was little choice.

"It just pulled on my heart a little bit. I'm good with the decision we made, but it's just not very inclusive."

Smart said she had a lot of discussions with customers last week and most were supportive, but she agrees with Worsley that businesses shouldn't have had to make the decision.

"Something needs to happen. I don't really know what it is, but it's just sad. It's causing unrest between families and friendships and businesses. I hope it doesn't last very long."

Calgary city council took matters into its own hands this week by passing a bylaw making vaccine proof mandatory for all non-essential businesses, with fines for violators. That new rule began Thursday.

"This bylaw will create a level playing field for business in Calgary and provide clear guidance on how to apply the requirement for proof of vaccination or negative COVID test," said Mayor Naheed Nenshi.

Worsley said she'll watch customer traffic for the next couple of weeks, but if business doesn't go well, she might be forced to opt into the program.

She said it's a difficult decision either way.

"No matter which way you choose to go, you're going to upset people and you're not going to please everybody. But ... the way I was brought up, everybody in life has a choice. "Unfortunately, at the moment, choices are being taken away."

It remains to be seen if Edmonton will follow Calgary's move.

This report by The Canadian Press was first published Sept. 23, 2021.