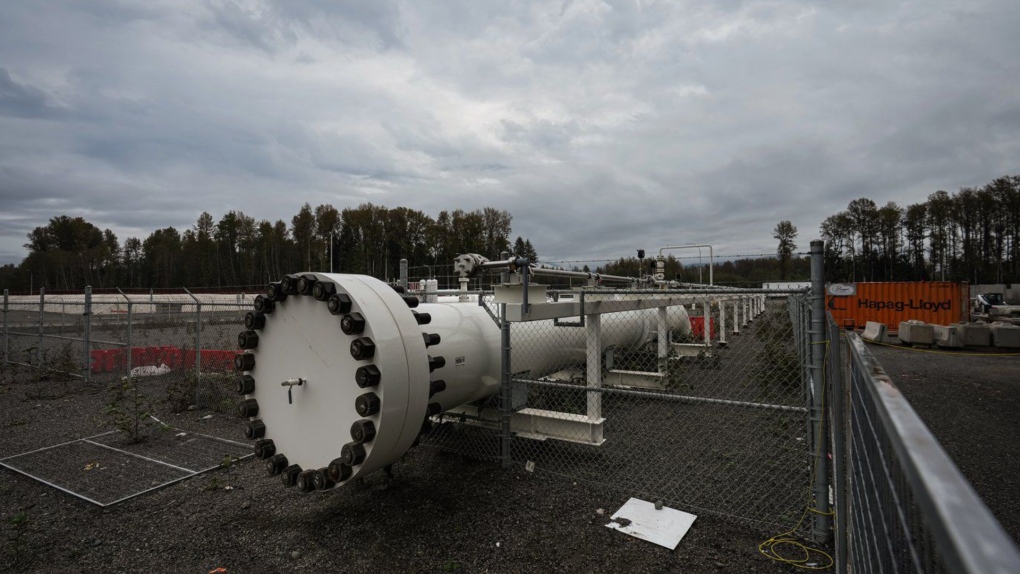 The terminus for the Coastal GasLink natural gas pipeline is seen at the LNG Canada export terminal under construction in Kitimat, B.C., on Wednesday, September 28, 2022. (THE CANADIAN PRESS/Darryl Dyck)
CALGARY -

TC Energy Corp. is expecting what it calls a "material increase" in the cost of its Coastal GasLink pipeline project.

The Calgary-based pipeline company said in an investor presentation Tuesday that it is facing significant cost pressures in Western Canada related to labour costs and shortages of skilled labour, along with contractor underperformance and disputes.

The project has also been hurt by other unexpected events including drought conditions, and erosion and sediment control challenges, the company said.

TC Energy did not put a dollar value on the cost overruns, though it said it expects to provide an updated capital cost estimate early next year that will incorporate the recent developments.

It is the second time in a handful of months that TC Energy has flagged the rising costs of Coastal GasLink. In July, the company said it expected the cost of the project spanning northern British Columbia had risen to $11.2 billion compared with an earlier estimate of $6.6 billion.

The 670-kilometre pipeline, which aims to carry natural gas across the province to the LNG Canada processing and export facility in Kitimat, B.C., is 80 per cent complete.

TC Energy CEO François Poirier said the company is pursuing potential recoveries from contractors to offset a portion of the rising costs, though those efforts might not be concluded until after the project is completed.

The company still expects Coastal GasLink to be completed by the end of 2023, and Poirier said its escalating price tag won't keep TC Energy from achieving its debt reduction target.

“Although Phase One of Coastal GasLink has been challenged by cost performance, we do not expect any impact on the sustainability of our dividend growth rate of three to five per cent or our ability to accelerate our deleveraging target from 2026,” said Poirier in a news release.

The Coastal GasLink pipeline is not the only major energy infrastructure project in Canada to be plagued by cost overruns this year. In February, the company behind the ongoing Trans Mountain pipeline expansion project — which will increase oil transportation capacity from Alberta to the West Coast — announced the new cost of the project is an estimated $21.4 billion, up from an earlier estimate of $12.6 billion.

Trans Mountain Corp. blamed the surging cost projections for the project on the COVID-19 pandemic and the effects of the November 2021 flooding in B.C., as well as project enhancements, increased security costs, route changes to avoid culturally and environmentally sensitive areas, and scheduling pressures related to permitting processes and construction challenges in difficult terrain.

This report by The Canadian Press was first published Nov. 29, 2022.