'That extra 10%': Calgary says everyone needs to push harder in Game 3 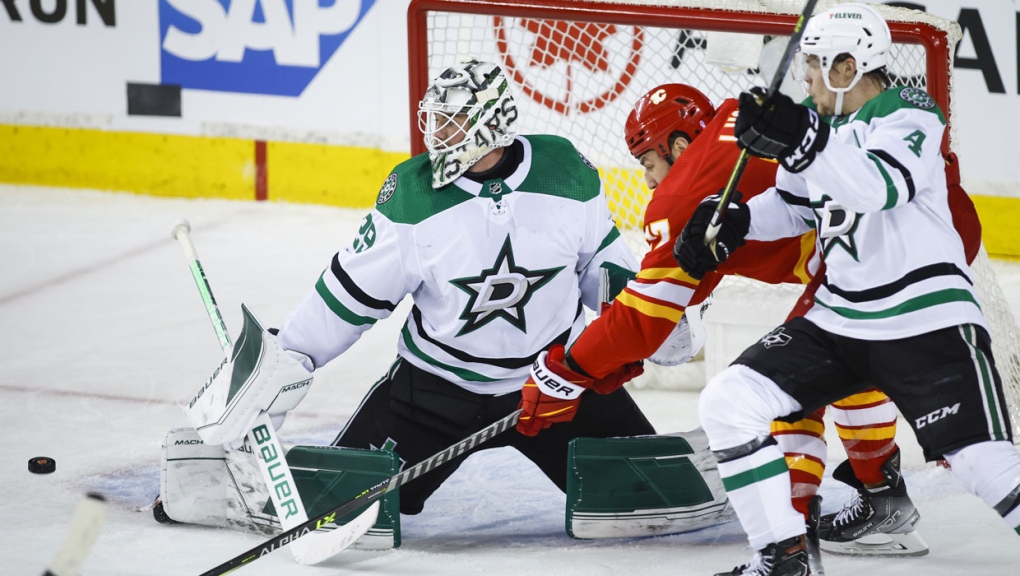 The Calgary Flames didn't have any trouble scoring goals in the regular season.

So far in the playoffs, it's been a different story, with the team netting just one goal in the first two games.

Whenever that happens, the top line of Elias Lindholm, Johnny Gaudreau and Matthew Tkachuk hear the criticism.

Head coach Darryl Sutter defended his top trio when he spoke to reporters on Saturday afternoon.

"Yeah I'm not going, that's for you guys to critique whether. I mean you base it just on scoring so I don't. I base it on winning."

But obviously the Flames have to get their offence going if they want to win this series. That means they'll have to go to the harder areas on the ice and get more traffic in front of Stars goaltender Jake Oettinger.

Forward Blake Coleman says everyone has to give a little more.

"You know give them credit. They've been a really good team so far and made us fight for every inch of space and it'll be no different tonight," Coleman said.

"You know you've just got to bring that extra 10 percent at this time of year and guys have got to find a way to get there and battle for goals."

The good news for the Flames is they don't mind playing on the road. The Flames won 25 games away from home this season and that will give them confidence.

Defenceman Erik Gudbranson says the Flames have to be ready for a hostile environment.

"It's part of playoff hockey," the veteran blueliner said.

"You go into these buildings and make it quiet is a great feeling. We've got a great opportunity to do that tonight. It's going to be a tough game, it's going to be really tough. This building is going to be loud so we're excited for it."

STARS HAPPY TO BE BACK HOME

As for the Stars, they've only scored two goals in this series but they accomplished exactly what they wanted in Calgary and forward Tyler Seguin says they want to take control of this series.

"Going into Calgary and you know getting that one win, that's a good start for us. You always want to try and get one," Seguin said.

"You know looking around the league last night and seeing what road teams are doing you know in their third games makes you be award and we definitely want to come out and have the right foot forward in tonight's start."

The Group of Seven on Tuesday was wrapping up a summit intended to send a strong signal of long-term commitment to Ukraine's future, ensuring that Russia pays a higher price for its invasion while also attempting to alleviate a global hunger crisis and show unity against climate change.

As COVID-19 fears ebb, Japan readies for tourists from abroad

Japan is bracing for a return of tourists from abroad after the island nation's border controls to curb the spread of coronavirus infections began gradually loosening earlier this month.