"The Flying Sailor," an animated short film based on a story about one of the victims in the 1917 Halifax explosion, is the third project Wendy Tilby and Amanda Forbis have worked on together. It's also the third time they've been nominated for an Oscar as a duo.

The Calgary-based filmmakers said they were "breathless" Tuesday morning when they found out they will be competing for best animated short at the Academy Awards ceremony in March.

"It's a little bit of the cherry on top of the sundae when you make a film like this, and it's years in the making," Tilby said in an interview alongside Forbis from the Sundance Film Festival in Park City, Utah, where "The Flying Sailor" is screening.

"Seeing it in theatre for audiences is kind of what we do it for, and getting this kind of reaction is just another affirmation that people are watching it, getting it, and enjoying it," Tilby said.

The project, which was produced by the National Film Board, took about three years to make and several more to conceive, Tilby said.

The eight-minute-long film centres on a seaman who was blasted into the air after two ships collided in the Halifax harbour during the First World War. He flew two kilometres before landing, and survived.

The idea to turn the English sailor's experience into a film came to Tilby and Forbis during a trip to Halifax in the early aughts in which they toured the Maritime Museum of the Atlantic and were astonished by the tale – which they admit may have been embellished over time.

Bow Valley College 3D instructor Jon-Jon Atienza, who worked on several of the visual effects, says this nomination will put Calgary on the map.

"I got involved midway into production," he said. "They just needed some visual effects assets like smoke, fire, explosion."

Calgary Economic Development (CED) says an Oscar nominee for this short film highlights the talented and creative minds in Alberta, imploring many to reach their aspirations at home.

"We really want to make it clear that you don't have to go away from Alberta and Calgary to make your career in the entertainment industry," said Luke Azvedo, vice president of creative industries and film commissioner with CED.

"I think we have a growing and burgeoning sector here that that is really telling the story of the talent that's here in this province."In part, they wanted to explore their own questions about what the near-death experience must have been like for the man in question.

"We tucked it away a little bit on the back burner for all these years. We've done a lot of commercial work, and we were ready to make another film. And we thought, 'OK, I think it's time to do The Flying Sailor,"' said Tilby.

"Time was wasting, and it seemed like the right time. I'm glad we did it when we did it because I think it benefited from a little marinating ... it made it a stronger film."

The filmmakers used accounts of trauma to create the film, which shows the sailor smoking a cigarette as two ships collide in front of him. The resulting explosion sends him somersaulting naked through the air, a cloud of smoke below and debris fly around; scenes from his life flash on the screen.

The Dec. 6, 1917 blast – the largest human-caused explosion before the first atomic bomb – followed a collision in Halifax Harbour between the French munitions ship Mont-Blanc and the Norwegian-flagged Belgian relief vessel Imo.

"This is the third film we've made together and without being conscious of it, all three of them have transcendent moments," said Tilby.

"When we show the sailor's life, just in little fragments, little glimpses, it's not meant to be a comprehensive portrait. It puts everything in perspective. Our lives are extremely profound and they're also just poof, a little speck. One can be comforted by that or sometimes people are terrified by that." 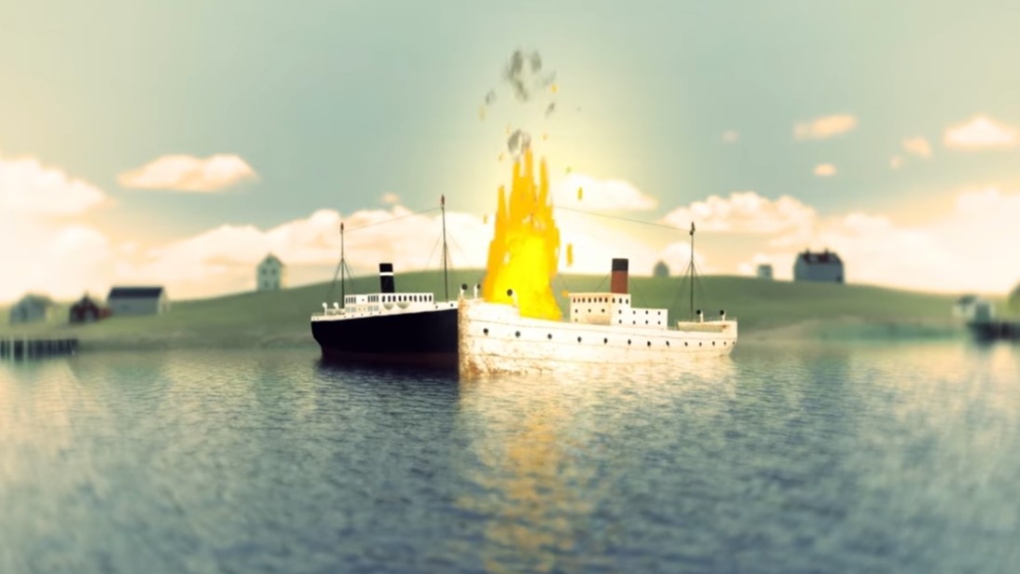 A screenshot from "The Flying Sailor," an animated short film about the Halifax Explosion, is seen. (Thew New Yorker/YouTube)The duo was previously nominated for their 1999 project "When the Day Breaks" as well as 2011's "Wild Life." Tilby also received an individual nomination for 1991's "Strings."

The animated short was produced for the NFB by executive producer David Christensen and distributed by North West Studio.

Tilby said that their relationship with the board has put them in a particularly "luxurious position" when making animated shorts – a rare privilege for most Canadians in the industry.

"They always talk about the hell of raising money and meeting expectations on multiple platforms," says Forbis. "We just don't have to deal with that and we feel like the luckiest people on the planet. It's not that it's a perfect institution, but it's very rare and precious."

Since its debut in 2022, the short has received numerous accolades and awards, including best animated short at the Calgary International Film Festival, best animation at the New York City Short Film Festival and best narrative film at Countryside Animafest Cyprus.

At the Oscars, they're competing against "The Boy, the Mole, the Fox and the Horse," "Ice Merchants," "My Year of Dicks," and "An Ostrich Told Me the World Is Fake and I Think I Believe It."

The Academy Awards celebrate their 95th anniversary this year, and winners will be announced during a ceremony hosted by Jimmy Kimmel on March 12.