'The world needs a Sharkasaurus now more than ever': Filming of western horror set for Alberta Badlands 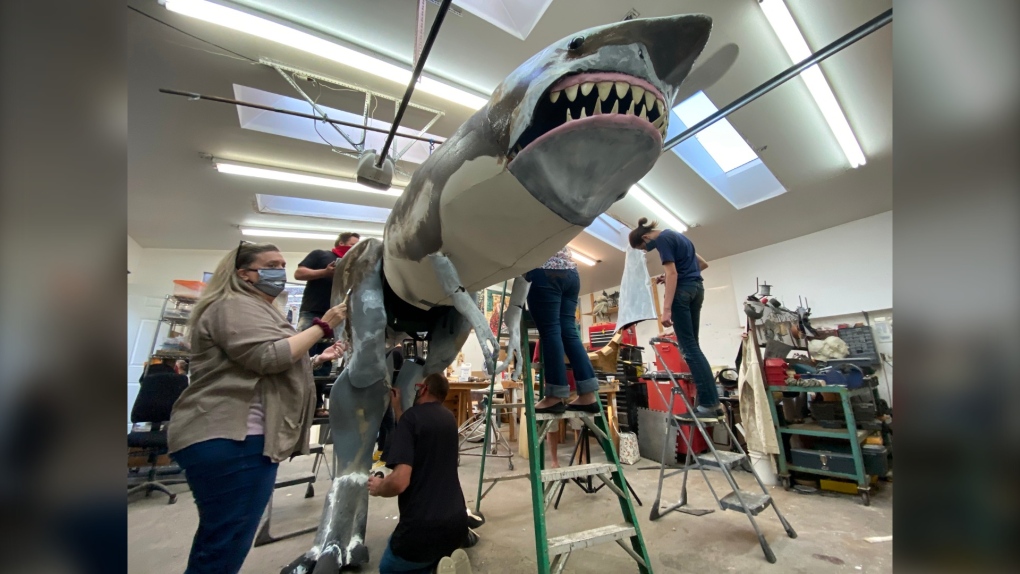 The Sharkasaurus suit has been beefed up for production of the movie. (Courtesy Spencer Estabrooks)

CALGARY -- Just when you thought it was safe to go back into the badlands.

Thanks to a successful Kickstarter campaign — which raised about $13,000 — filming of the western horror movie Sharkasaurus is set for this weekend at the CL Ranch west of Calgary, which was once home to productions like Lonesome Dove and Hell on Wheels.

The storyline involves a group of coal miners who unearth a Sharkasaurus in the badlands of central Alberta. The creature then wreaks havoc on the town of Drumheller and its inhabitants.

Adding to the terror is the fact that, as a half-shark and half- tyrannosaurus, Sharkasaurus can either 'swim' underground, or run on land.

The fact production is happening is an accomplishment in itself, said filmmaker Spencer Esterbrooks, as the Kickstarter was launched March 8, just as much of the world was going into lockdown due to the COVID-19 pandemic.

"I think the world needs a Sharkasaurus now more than ever," he said.

"We got 40 per cent of our budget in the first couple of days then the world shut down and stock markets crashed and it got a little crazy out there.

"We pushed through and persevered and people dug deep and gave."

The short developed a minor cult following after touring film festivals around the globe, leading to the creation of a graphic novel with the help of Renegade Arts Entertainment based in Canmore, along with a nearly three-metre high cardboard cut-out, both of which Estabrooks and crew spent the next year taking to horror and comic conventions.

For the movie, the shark suit — designed and built by artist Brian Cooley, who is best known for sculpting life-sized dinos for the Royal Tyrrell Museum and National Geographic — has been beefed up even more.

"When I first saw it with the flesh on … it's wow, this is a massive set piece and I can't wait to see it in action."

Completing filming in two days will also be a herculean task.

"Our vision is huge, it's as big as Skarasaurus, but our budget is really small," said Estabrooks.

"CL Ranch has given us an opportunity to shoot there, there's a lot of volunteers on set that are coming out to help, it's a really ambitious shoot."

Complicating things further is the social distancing measures required during the pandemic.

"It's a pretty big wrench," said Estabrooks. "Moreso for smaller productions because we can't afford to just throw money at problems, we have to be creative."

Having only five principle actors and many of the scenes being set outdoors will help.

"We're pretty lucky because in our script no one is really touching each other," he said. "You'll get bit by Sharkasaurus and blasted by a fire extinguisher full of blood but no one has to touch you for that kind of stuff.

"And there's one tavern scene where the four primary actors will be unmasked while they're shooting, but we're doing temperature checks and making sure everyone is safe."

Once filming is done, post-production will take a month or two then Estabrooks says he has to figure out how to distribute it during a pandemic.

"We're going to be on the film festival circuit, or looking for something new, I think the world is changing, so I'm not sure when people are going to be able to see Sharkasaurus," he said.

"I'm interested in looking at alternative ideas besides film festivals and other ways to share it with the world."